Dark Eldar (or is that Ynnari) for the Doubles - Part 2 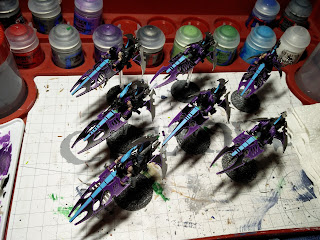 You'd be forgiven for thinking that I've not actually made any progress on these guys. Well, it doesn't really feel like I'm much further along. It's frustrating me how long these are taking which is counter-productive because I'm then struggling to motivate myself to make progress. I'm only putting in an hour or so each evening at the moment and clearly that isn't going to be enough to get that to-do list down to size.

Don't get me wrong. I'm pleased with the work I've done so far on these things. Well, to a point anyway, I still find painting difficult because I'm just not very good at it. I just don't seem to get the same results as other people do and they're doing it in half of the time. I'm not saying I should just be able to pick up a brush and win a Golden Demon but I don't even feel like I get the paint the right consistency or something. It's funny that I'm back to painting an army for a tournament again when I specifically said I was just going to paint whatever I fancied!

Anyway, I think the Reavers look good enough so let's have a quick look at what I actually have done: 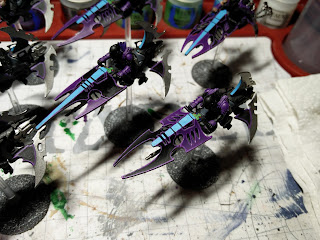 After a discussion with friends I decided to repaint the seats in grey (Mechanicum Standard to be precise). Jamie made a good point that they look like leather but stand out too much, detracting from the rest of the model. Anyway, I decided to paint the armour on the riders in purple to match the carapace sections. Their suits underneath are still black though so I think that works well. I've also picked out the skin on those with bare arms and I'm reasonably happy with the result. There were two of the seven that hadn't got the controls painted in on the bikes too so they're now done. I've also painted all the little dots on the cluster caltrops not that anyone will ever notice!

Last but not least, the eagle-eyed amongst you might've noticed I've changed the faceplates to black in the end. I'm waiting for some paints to come into my FLGS but once they do the helmets will be gold I think which will help to tie them into the Scourges who have gold faceplates. I'll try and mute it down a bit with washes so it isn't bright shiny gold but I think it'll just add a little something. I'd considered purple or silver/steel for the helmets but I want to see how gold works out. Once that's done the facemasks will get a couple of coats of 'ardcoat to give a high shine. I'd like to maybe drybrush a bit of the cyan up the middle of their facemasks to give the impression that the blue is reflecting in them. Probably won't work out like I see it in my head though.

Whilst I wait for my order of paints to come in, I'll probably move onto the Venoms. I'm sure progress will be quicker with them since well, vehicles always go quicker. There's a couple of decisions to make there too though. For example, do I keep the flag/trophy poles or remove them. I've seen both and can't make my mind up. Removing them means less painting at least!!
Posted by From The Fang at 23:58:00