Dark Eldar (or is that Ynnari) for the Doubles 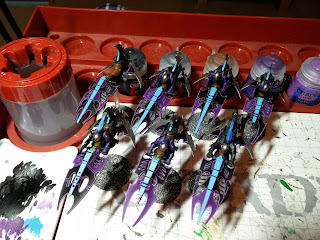 My posting is pretty sporadic recently but I've been working towards getting my Dark Eldar ready for the 40K Doubles at Warhammer World in April. That's about six weeks away and I have an insane amount to paint between now and then. Matt and I have decided to take a Eldar/Dark Eldar army under the new Ynnari rules. Some of my stuff is at least partly painted but basically I need to paint:


That's just stupid isn't it?! As I say, some of the stuff is at least started but it's going to take a pretty huge effort to get everything ready. We'll probably need to have a backup force in case I don't manage it but I'm trying to be as optimistic as possible!

Anyway, my efforts so far have mostly been directed at the Reavers. I've got the carapaces all done and I'm moving to work on the riders as a break from the highlighting I need to do on the bodies of the jetbikes.

I don't have much time to blog about my progress but I'll try to throw up little updates like this from time to time over the next few weeks. Wish me luck!
Posted by From The Fang at 20:38:00