Well folks this is probably the penultimate post on this project. I'm actually blogging from the Gaming Garage(TM) right now! There's very little actual work to do on it. All that's really left is to move everything in. I'll post a final update when that's happened so you can see everything nicely stored away and my hobby area properly set up.

One the face of it not much has changed since the pictures taken just before the big X-wing game but there's some finishing touches that, well, finish it off, 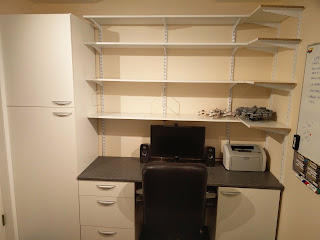 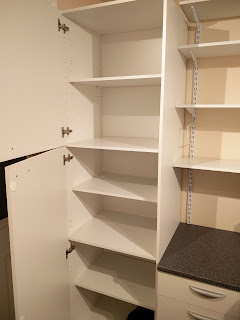 These pictures shows my hobby area. The tall larder unit on the left will hopefully give me enough space to store all of my armies with some room for expansion. There's a little voice in my head saying I'll need more shelves but we'll see what happens. Most likely I'll add a second one in the top section. It's deceptive how much space an army takes up sometimes but in the next post you'll hopefully be seeing it full of miniatures. Only one tiny thing left to do in this area is to put some white finishing strips on the ends of the shelves to neaten them up. 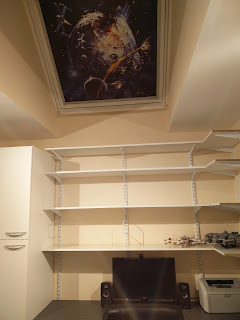 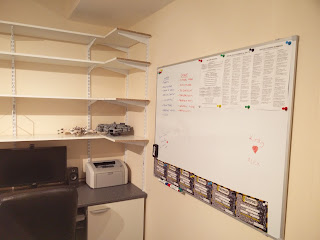 These pictures are just to give you some idea of where everything is. The whiteboard was up in the old gaming room. The eagle-eyed amongst you will notice the list of scenery I have been intending to create for a long time. That'll be high up my list of priorities once I'm fully moved in. You can see there's a nice big Velux window above my hobby area which, even with the shelves blocking some of the light, gives me a good chunk of natural light for painting in the day time. I intend to get at least one daylight lamp to help me paint better at night. 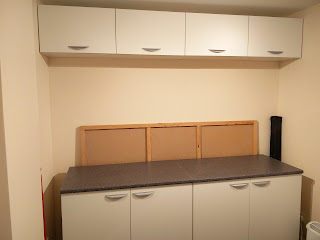 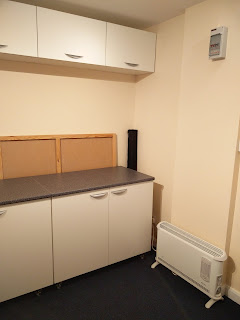 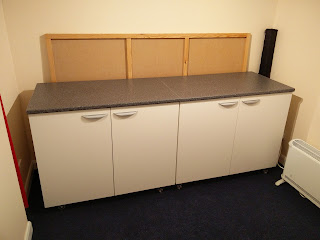 Down the opposite end of the room (a couple of metres from the desk) are my two large cupboards for more storage. These will primarily house my scenery etc as they'll be the ones that support the board (tucked in behind at the moment). They're on castors so they can be rolled into place, the brakes applied at then the board slid on top. I want to make some adjustments to the board so they slot underneath tightly to prevent the board moving around. It could also do with a spot of reinforcing too. You can also see my little electric radiator that works wonders at keeping the place warm. It's not a big room and well insulated so we'll never be stood shivering in Winter.

Above the large wheeled cupboards are four top-hinged cupboards for storing stuff I won't need access too that often. That means all my boxes of models yet to be assembled and empty boxes for things I've got out on display etc. There's not a huge amount of room in them but it keeps things out of the way and stops them collecting dust.

Right, next time I post about this I'll hopefully have the vast majority of my stuff moved in. I'm intending to sort through it as I move it in though so it won't be an overnight thing. There's still a couple of finishing touches here and there. Like I say, I want to adjust the gaming board and maybe add another shelf or two inside the cupboards as required. I also want to create some sort of paint rack. Oh and I'm going to source some cheap folding stools.
Posted by From The Fang at 17:00:00