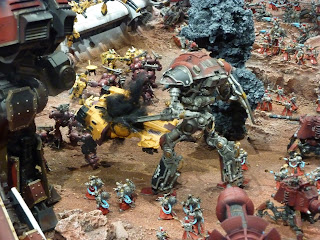 Matt, Scott and I headed down to Nottingham on Sunday for Games Workshop's 40th birthday celebrations. I didn't bother with the open days this year but since this was a free (but ticketed) event I figured why the hell not? The deal was sweetened by the fact that the ticket included free entry to the exhibition hall. We'd only been recently but I knew there were new HH dioramas and more excitingly for me a Tau vs Admech one which you can see below and right.

We didn't anticipate there actually being much to see and do so we also took some miniatures for a relaxed 1,750 pt game of my Orks vs. Matt & Scotts' combined AM and BA force. What better way to celebrate GW's birthday with a classic clash between Orks and the Imperium. I'll report the battle in full in the next post so it doesn't get lost in this one. 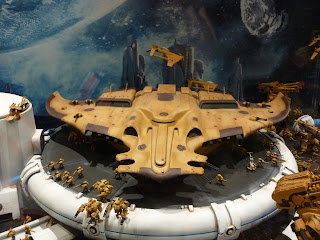 Well, upon seeing what GW had to offer us we were fully expecting to be home by lunch time! In the main hall, along with the usual permanent shops, they'd got the events team's Nick Bayton playing Warhammer Quest with people, some kitbashing tables, a FW stall selling some new stuff and their existing range plus a sale (!) table selling off some old kits for 50% off. The latter sounds a lot more exciting than it actually was. What it basically came down to was dead stock that they were trying to flog. The old finecast assassins, the small format codices (clearly a bad idea), the fluff and art books that came with the 7th edition rulebook, the Imperial Knight Companion book and a pile of fantasy stuff (which may or may not have been any good - I have no idea). There were some t-shirts on sale too but I wish GW would make some more subtle ones. I'm not ashamed of my hobby but I don't need an enormous SW symbol across my chest. Tacky. 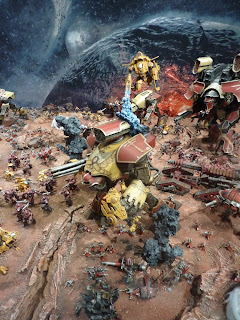 Through Bugman's and into the dining hall and we found the Studio section. Here there were some of the classic old models which made me wish I still had my Predator Annihilator and Terminator Captain. There was also Jes Goodwin with some of his oldest sketchbooks. I got a chance to chat to him about some of the new stuff that's remakes of his and he said he has mixed feelings. Some of them are an improvement because of the technology coming on but not all of them! There was also some tables with the guys who have created the exhibition dioramas. One of the painters said he can knock out a finished Stormcast Eternal in about 25 mins. Granted he's airbrushing a basecoat of gold and then washing first but still, I'd barely have the blue on in 25 mins! I'm gonna have to time myself next time I paint! It was interesting to see pictures of the displays evolving from piles of cardboard into the finished project. I got a chance to chat to them and ask for more stuff dying or more bodies at least! They said the new Tau board has more (which it certainly did - as you can see in the pictures). 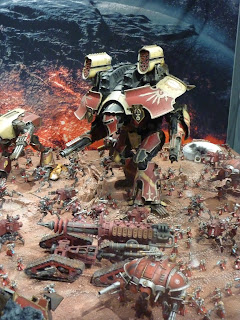 Finally, we were treated to the new Raven Guard FW HH kits including Corax. Have to say I love those models. Far more exciting for me though was the new human and orc Bloodbowl players that I'm sure you've seen on other sites by now. I wish they'd be more specific on when they're hitting though with "coming next season" being irritatingly vague. The models certainly seem like early mock ups but you just never know with GW. Anyway, that little lot only took us about 45 mins to get around so we were convinced we'd struggle to fill the day.

That was until we walked across the car park to the licensed video game displays. Firstly, it felt better because it was in a building I've never ventured into before (sad I know) but also because they've got a great range now. I was disappointed not to see Freeblade but I suppose it's already released (if not on Android). Anyway, Eisenhorn was the first game we came across. It's not a finished game yet but I think part of the problem for me is that I haven't read the books (they're on my list) so it wouldn't mean a lot to me. Matt had a go though but wasn't particularly blown away. There was also a version of Talisman set in the Horus Heresy. I had a go but it basically felt like I was just clicking and rolling virtual dice but not really interacting. I did get a free copy of the original Talisman though so I'll give that a go and perhaps that will help me understand it better. It's difficult to get a feel for the game from 5 mins of play. 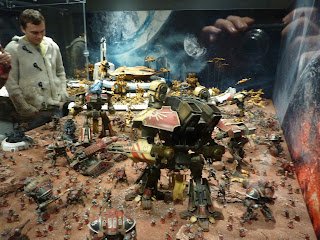 Matt had a go at the Vermintide game and said it was easily the best of the bunch. It's a co-operative first person game which Matt described as Left 4 Dead with Skaven instead of zombies and bows and arrows instead of guns. Sounds good already. We also chatted to the guys from Derp Studios about their Tactical Objectives app. It's a nice little app for keeping track in Maelstrom games but if you've already bought the cards £4.99 for the basic app (with original deck and Cities of Death deck included) is steep, especially when each faction is £2.99 on top. Cheaper than the physical cards and a nice idea but I think I'll stick with the cards I already own. 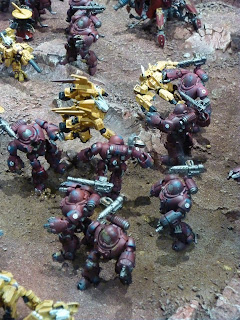 The big deal for me though was the presence of Creative Assembly with their Total War: Warhammer game. It's been on the edge of my radar since I'm torn in my emotions towards it. On the one hand it's Total War and I lost weeks of my life to the first Rome game but it's Fantasy and I just don't know enough about it to be instantly excited. They did a 30 minute presentation on it though and within about 5 minutes I was blown away.

The first thing that strikes you is that clearly the people making it have a lot of love for the source material. They've either done their research or else, like the guy doing the presentation, are players themselves. They've taken time to make the factions feel unique and get their individual personalities across. The flythrough was from the Greenskinz perspective. I was particularly impressed with the effects of conquering a dwarven settlement and seeing it "orcified" with glyphs and gubbinz. I could go on about how good this game looks and how much of my life will probably be lost to it but I think the main point is that it looks like all the good things from Rome I without the crap from Rome II. They've clearly come a long way in terms of their understanding of what players want and the interface is much more intuitive. We didn't see battles in action (although people could play them) but what we saw of the world map is really impressive stuff. I'll probably wait for a Steam sale to pick it up but it's going on my wishlist right now (literally). Here's a Youtube video of what we saw in the run through so you can judge for yourselves. 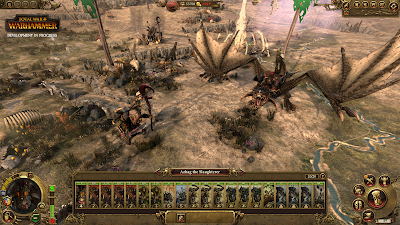 Once we'd left the video game section it was lunch time so a quick burger later and we started on our game. Since we weren't exactly rushing we only just got enough time to look around the exhibition but still enough for me to take tons of pictures of the Tau.

Conclusion
Well, considering it was free entry the bar was set pretty low but I have to say I had a great day. This was in no small part down to the 40K game we played (more in the next post) but I was blown away with the video game demonstration. GW definitely got something right when they realised they need to do more licensing. It did make me wish I'd thought of a tactical objectives app though!

The main thing for me though was the startling divide being GW policy and the policy of the video game companies. These guys, particularly Creative Assembly, really know how to make you want to buy a product or even preorder it. The major difference is they're showing us work in progress stuff. We aren't talking a measly two Bloodbowl models, we're talking playable versions of new games. That's such a huge breath of fresh air at Warhammer World. We're so used to being teased with stuff or having information drip fed to us that you begin to forget how other companies do it. I left feeling far more excited about the third party products than anything GW themselves were doing.

That's a really sad state of affairs and one I can't forgive GW for at all. Why the hell didn't they have an early playtest version of Bloodbowl for us to play? It's free playtesting feedback for them from people who aren't being paid to have an opinion. I just can't for a second understand their secrecy policy. No-one is going to copy what they're doing who hasn't already. Dreadball already exists so who cares if people know what to expect from the new Bloodbowl! Why weren't they even teasing more stuff from the specialist games. Why do we have to wait for "rumours" all the time, most of which GW blatantly "leak" themselves.

It was an interesting juxtaposition of one of the best games of 40K I've played in a while set in a backdrop of minimal effort from GW. With the exception of the free cake, it really didn't feel like a celebration of their past. It's a total opportunity missed. Bloodbowl was one of their earliest creations and they weren't showing off it's remake at an anniversary event!! Seriously, who runs their marketing department?? The day just felt like a bit of an afterthought, someone realised it was the 40th anniversary so they figured they ought to do something to commemorate it.

We had a great day but we had to "forge our own narrative" to do it, I guess that's why GW wants us to do!

Anyway, come back later in the week for our battle report and then I promise I'll get onto some Double Trouble discussion.
Posted by From The Fang at 17:00:00