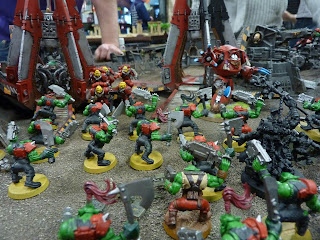 Well, I fully intended this battle report to have been up last night but that also involved me writing it on Wednesday night which just didn't happen. Anyway, here it is, better late than never.

In order to celebrate GW's 40th anniversary we decided to have a relaxed game of 40K during our visit last Sunday. We went for a clash between the combined might of Matt's AM and Scott's BA against my Ork horde. We were sharing our army lists in advance so that we could try to make it a reasonably close game rather than a white wash. This is something I've talked about before but I really think it makes for much better games. We don't get many opportunities to play these days so having a totally one-sided affair just feels like a waste. Anyway, Matt and Scott would have 875 pts each to fend off my full 1,750 pt mob of Orks. 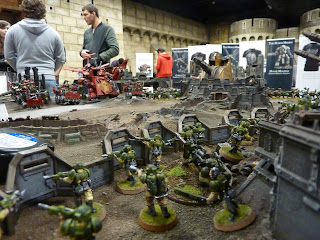 Matt's guard force consisted of an infantry platoon including mortars and the obligatory PCS and infantry squads. To that he added some stormtroopers, ratlings and an aegis line with quad gun (since he knew I'd be bringing a couple of flyers. The mission we devised would see a beleaguered Imperial world under assault from the greenskins. The PDF had requested aid from the Blood Angels and would need to hold a key bunker long enough for their power armour clad allies to rescue them (or else avenge their deaths). The Blood Angels in question consisted of two 5-man tactical squads in pods, a furioso dread in a pod, some jump pack death company with a chaplain and a squad of terminators.

Facing them was the Ork horde consisting a warboss in mega armour leading a mob of 20 boyz on foot, a weirdboy leading a second score of boyz, a big mek sporting an SAG joined by lootas and 3 mobs of boyz in trukks each with a klaw-wielding nob. They'd be joined by a squadron of three deffkoptas, a dakkajet, blitzabommer and finally a morkanaut with KFF containing 3 meks and 3 burnas (that was the closest they'd let me come to a Stompa!).

We didn't get much choice over the table so it probably had a bit more scenery than we'd like but it certainly made the game more immersive to playing on a full table of terrain (yeah, yeah I need to get mine done!). We'd planned on a central bastion or similar for the PDF to defend but in the end we chose a Firestorm Redoubt. The board featured multiple gun emplacements but we reasoned that a squig had chewed through a crucial power cable so they'd be inactive (had we put more thought into it we could've had some system where Matt and Scott could roll to see if any came back on line but nevermind). 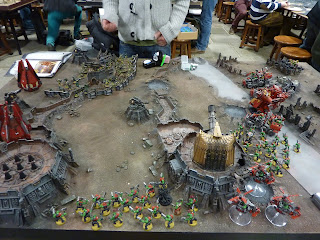 The PDF deployed surrounding the redoubt with the PCS inside the structure. The greenskin horde could then deploy anywwhere that was 24" or more away from an AM unit. All reserves would be guaranteed to arrive on turn 2 (i.e. all the BA but also the Ork flyers). The Ork objective would be to control the structure at the end of the game (which we gave AV12 in case it came to that).  You can see the deployment in the picture on the right.

There was no grand strategy on my part. I like to keep Orks as Orks and just charge headlong into combat without much thought of the consequences. The mek was a little more kunning than brutal though and kept his lootas at range to pound the "stoopid oomies" from range. 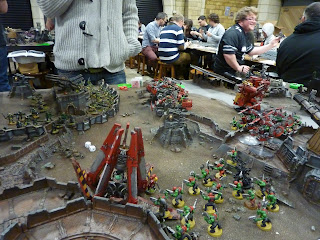 As the early morning mist cleared the PDF finally saw what they'd heard coming in the night. The guardsmen took aim and launched an opening salvo at the xenos scum but still bleary-eyed from a troubled night's sleep they could only damage one of the trukks and bring down a couple of the onrushing boyz.

Knowing they wouldn't be able to sink their teeth into their human enemies yet the Orks simply charged at them as fast as possible. The morkanaut pilot didn't seem to get the message though and chose to fire his weapons rather than keep pace with the rest of the boyz. That proved to be pretty ineffective too as just a handful of the humans fell. The weirdboy was able to summon the power of the warp but his 'eadbanger missed it's mark and failed to bring down the guardsman carrying a flamer in the nearby squad and he wasn't able to wield enough warp energy for da krunch. 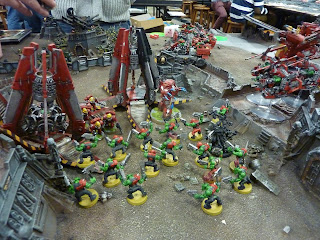 The Blood Angels came tearing down through the clouds in their drop pods to aid their besieged allies. Two pods slammed down bringing a tactical squad and the dreadnought in close to the weirdboy's mob. The marines and dread both opened up with a torrent of promethium which reduced the mob into little more than a gang. The guardsmen managed to destroy stop all of the trukks.

Meanwhile, the terminators teleported in but in the rush to save the crucial building they missed their target and would need to cover ground to get to grips with their foe. The death company and chaplain came in behind the lines in order to counter-charge once the first wave of guardsmen had been slain in the inevitable onslaught. Finally the last drop pod brought the tactical marines down in front of lootas and allowed them to cut half the mob down with bolter fire.

The onslaught came on quickly with the warboss declaring a Waaagh! This would not only help the boyz get into combat but also give the flyers a boost to their firepower. Speaking of which, the bommer came in low over the squad shooting the lootas but missed the mark with its bomb meaning only a single marine died. That would be all it did too as the quad gun made short work of it after the over-confident Ork pilot made no attempt to avoid the incoming fire. 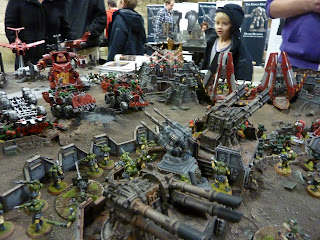 The dakkajet also hit the squad with all of its supashootas but left a couple of marines after most of its shots failed to penetrate the marines' power armour. Meanwhile, the mobs clambered out of the wreckage of their trukks and charged into the guardsmen killing the squads on the front line. The Morkanaut advanced dispensing its cargo of burnas who incinerated a full unit of humans.

The weirdboy also frazzled three of the tactical squad with a bolt of psychic energy before he and the remains of his mob charged in to finish off the remaining two. Rather than target the closest threat the mek directed his lootas to hit the guardsmen again and was at least able to damage the quad gun before the morkanaut could finish it off along with some of the men manning it. 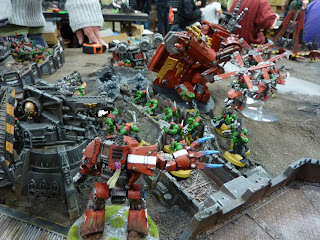 The dreadnought slammed into the warboss' mob but in its zeal for combat it neglected to fire its flamer again which proved to be costly. It couldn't cut down the boyz quick enough to stop the warboss from tearing it apart with his power klaws over the next two combat phases.

The death company executed their counter charge plan to perfection, cutting a full mob of Orks down before they knew what hit them. The fire from the remaining guardsmen was enough to cut a second mob down to size and cause a third to flee. The death company then turned their attention to the deffkoptas and cut them down too. The warboss' mob returned the favour though and crushed the death company and its chaplain, thanks mostly to the warboss himself and his klaws. 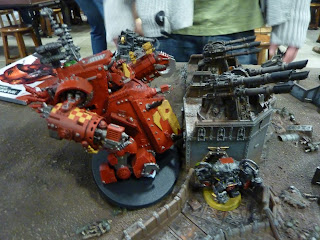 A combination of the retreating mob regrouping at the right moment and fire from the lootas meant the remaining tactical squad was dealt with but not before the mek was killed. The morkanaut gunned down the remaining stormtroopers after the terminators had killed what remained of the weirdboy and his mob. The final mob from the trukks was able to kill off the ratlings and help deal with the mortars too. This left the morkanaut and warboss stood outside the structure containing the PCS (one of which had been killed by an earlier glancing hit from the deffkoptas.

With empty drop pods the only remnants of the BA force, the Orks simply needed to enter the base and kill off the occupants but in typical Orky fashion (and because I thought it was a better way to end the game), they chose to smash the structure apart with their S10 fists. I think we'll call than an Ork victory! WAAAAAGGGGHHHH!!!

Conclusion
Once again, our system of planning our armies together meant that we ended up with a very close game which we all really enjoyed playing. I think my battle report has made it seem a lot more one-sided than it actually was. There was a point when the AM had taken out all of the trukks and the BA had incinerated a good chunk of my Orks and I thought I wouldn't actually get into combat. Having not played Orks in a while though I'd somewhat forgot how their relentless assault works. You lose a big pile of boyz early on but what's left smashes through the opposition. It's kind of the opposite of how Tau work, you feel like you're cutting your open down in great swathes but as soon as the combats start you wish you'd killed more sooner!

I'd planned the list with the intention of keeping plenty of the Orky flavour of randomness that I love about the army. Sadly, I never rolled a double on the SAG, got decent powers with the weirdboy but barely used him and the blitza-bommer died a premature death after getting "just like dis" on its first bomb. They basically proved to be more reliable than I hoped but it still felt like a very orky game.

I thoroughly enjoyed using Orks for a change having played with Tau quite a bit recently. They're great fun to use as you don't feel like being too tactical is the right thing to do. I really think Mob Rule is a great rule despite its many detractors. Remember that the old rule only worked for 10+ mobs so most of the time you weren't getting Fearless anyway when using trukk-sized mobs. This way you might lose a few boyz but they'll stay in the fight longer. I think having Fearless would've been OTT since they took away the penalty kills in combat.

Finally, it was the first time I really got to use the morkanaut to any great effect. It probably wasn't a fair choice since Matt and Scott didn't have much to deal with AV13 but it would've soon died to the dread or terminators. You feel like it's got a decent amount of firepower but then remember the BS2 and Get's Hot and soon it doesn't look so powerful. Still, it's a low-AP threat to terminators and the like. Dropping off some burnas into the guardsmen was satisfying too.

In typical fashion for me, this game makes me want to paint Orks again despite saying at the start of the year that they probably wouldn't get a look in. I'm very tempted to pick up some stormboyz too despite promising myself I won't be getting anything new. Mind you, I am planning on selling quite a bit of stuff so I'll probably have enough money for some....

I really must get on with sorting the Double Trouble details out. The next post will cover the deployment types and custom Tactical Objectives (the first draft before playtesting at least). I'll also cover a couple of things that have come up in comments and emails regarding army selection.
Posted by From The Fang at 17:00:00