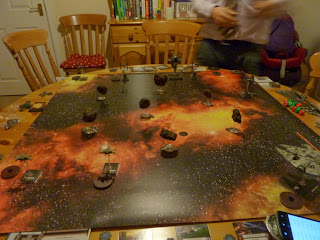 Despite our little boy being just over a week old I somehow managed to persuade my wife to allow me to get a game of x-wing in with Matt last night. We've been wanting to have a full game ever since we dipped our toes into the water last month. We've both made a pact that we'll avoid reading about the game online to prevent us bringing "net lists". If we find the good combinations by ourselves then fine but we don't want to make it into a competitive game. I know I've said this before but I think in this time when 40K is becoming ever more ridiculous it's important to have a game you can just play for fun. Incidentally I'll be talking about the recent changes to 40K and, specifically, how they might affect Blog Wars 7 in a later post.

Anyway, back to a galaxy far away. The first expansions I bought were the A-wing and Millennium Falcon. I've already given the A-wing a spin and loved it so was itching to try the Falcon out. We wanted to keep things pretty simple though and Matt has limited Imperial ships at the minute. Therefore we just fought to the death rather than playing one of the missions. 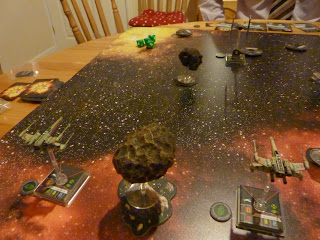 I'll try and make the battle report simple so that anyone who hasn't played the game can get an idea for how it works. It's worth checking out the tutorial video on YouTube to see how the game works before reading the report though.

The rebels were outnumbered 5-3 but the academy pilots are all pilot skill 1 so they'd be moving first but shooting last. Luke and Boba are both pilot skill 8 so they'd be firing first together but with both lists at bang on 100pts Boba would get to roll first.

All three of my ships blasted forwards with Luke and Garven ganging up on Dark Curse. My rolling was disgusting and Matt was unlucky meaning Dark Curse was blown to pieces with the first volley from the X-wings. Meanwhile Chewbacca was targeting one of the academy pilots but could only cause 1 damage. Boba fired the homing missiles at Chewbacca but only stripped a shield token. In the following round Chewy completed the job though evening up the numbers and making it look like a Rebel whitewash was on the cards. 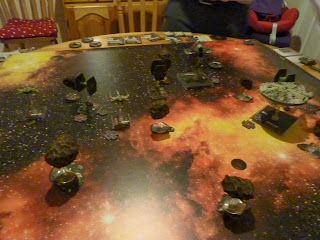 Boba Fett and the remaining pair of TIEs had other ideas though. They combined to gun down Garven Dreis whilst Luke misjudged his manoeuvre and was lucky not to take damage from his collision with an asteroid. Meanwhile Chewbacca was in behind the Firespray and was slowly breaking down its shields. Boba responded by dropping a proximity mine to try and throw Chewy off. By some flukethe YT-1300 was able to make a 90 degree turn and squeeze in between the mine and an asteroid without touching either! This allowed Chewbacca to completely remove the Firespray's shields. 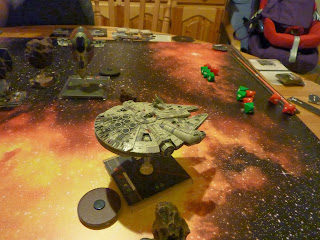 Sensing that Boba was in trouble the TIEs positioned themselves to block the Corellian freighter. This allowed Fett to go off in pursuit of Luke. Several times he was able to damage Luke's shields only for R2D2 to repair the damage. Needing to make green manoeuvres was slowing Luke down though and Boba Fett was closing in. A short range blast from the Firespray was able to badly damage the x-wing and Luke had no choice but to perform a koiogran turn to avoid the edge of the battlezone and hopefully get one last volley off on Boba before being destroyed. 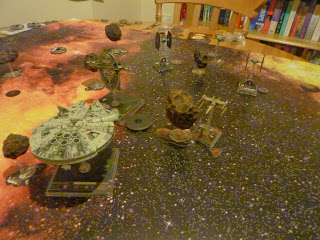 In the meantime Chewbacca had badly damaged one TIE fighter making it repeatedly gain stress tokens when it moved. This allowed Chewy to concetrate on the other TIE fighter and finish it off. Not before he'd lost all of his shields though.

Boba opened up on Luke and with his shields depleted, young Skywalker met a fiery demise. With his last breath he was able to fire his x-wing's blasters and cause damage to the Firespray though. By this time the YT-1300 was on hand to enact vengeance. The turrets of the rebel ship were able to keep a bead on the Firespray despite evasive manoeuvres from its pilot. Chewbacca's ship took damage but was able to bring down the bounty hunter and could now turn his attention to the stricken TIE to clean up.

Conclusion
That turned out to be an incredibly close game in the end. When two of the TIEs were destroyed within minutes I didn't fancy Matt's chances but Boba Fett certainly pulled his weight by gunning Luke down solo and helping take down Garven. The homing missiles were massively underwhelming though and I'm not really sure why you'd use them over the blaster thing he can take. The bomb could've been great but Chewy was jammy to avoid it. Matt had a spare point and at the last minute threw Determination on Boba. Obviously this could've been useful but in hindsight he'd have been better off taking Veteran Instincts to make him skill 10 and therefore preventing Luke from firing back at the same time. 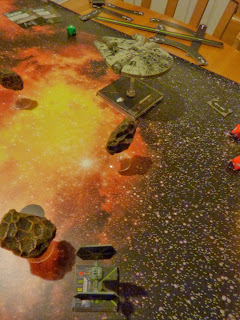 Chewbacca was clearly the star of the show though but there's do doubt he was lucky several times when it came to squeezing between the asteroids. The 360 degree field of fire for the YT-1300 guns makes a huge difference. It means there's rarely a need to perform a koiogran turn which means all of the fire is with target locks. I'm interested to see how I can equip it with secondary weapons to make it even more deadly.

In our previous test games Luke has felt invincible when paired with R2D2 but we were sure this would change when we played a bigger game. Indeed it did and when concentrated fire was applied to him he struggled to maintain his shields and prevent Boba from getting in close. The x-wings can be backed into a corner quite easily by the more agile Imperial ships.

I'm already excited about the next game. In that one I'm going to try and use one of each of the ships I've got to get a feel for what works and what they're capable of. It really is a joy to play a game with fully painted miniatures on a beautifully themed mat. There's literally counters for everything too which is a great. The asteroids I made provided great scenery to the battle too and are a big improvement on the 2D templates. I'll post something up soon about how I made them. The big thing for me is that I've found a miniatures game with depth that doesn't require much on the hobby side. It's made me more determined to get to the same point with 40K too but that's a long way off I'm afraid.
Posted by From The Fang at 21:23:00