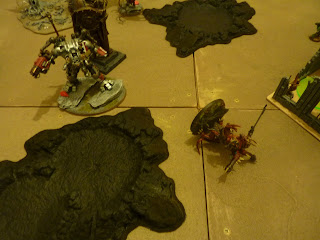 Matt and I had a couple of games last night to try out the new Chaos Daemons codex. The first game saw Matt field a mostly CSM force with some daemonic allies against a Grey Knight army under my control (I borrowed Matt's models of course). The second was a pure Daemons list taking on my Ravenwing DA.

Battle Reports
I'll only cover the battles themselves briefly because the main focus of this post will be about the new units themselves.

In the first battle the main bulk of Matt's force consisted of Abaddon with 3 5-man plasma gun toting Chosen supported by two Heldrakes. The Daemon contingent was in the form of a Bloodthirster, Khorne Daemon Prince and some Plaguebearers manning a quad-gun on an aegis line. Not surprisingly the sheer volume of plasma made short work of my two dreadknights but not before one of them had killed the Daemon Prince. Abaddon was slowly whittled down by my strike squads. My paladins arrived but couldn't affect the game very much as Draigo failed to deal with Abaddon quickly enough. Eventually the combination of the Bloodthirster (who dispatched the strike squads) and Heldrakes was enough to wipe out the Grey Knights. 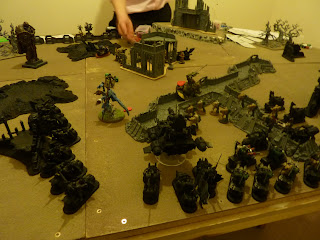 In the second game I was hoping to make the most of the first time I've been able to get first turn with my Ravenwing! Matt's force had a ridiculous amount of psychic powers (he almost had more cards than models!) but was this time geared around Nurgle with Fateweaver and some Bloodcrushers to represent the other gods. I was hoping to be able to shoot down one of his daemon princes in my first turn with a combination of black knights and salvo bolters but sadly he survived with two wounds intact. The daemon prince struck back killing a couple of knights who failed to Hit & Run. The other knights lead by Sammael were slowly whittled down by Fateweaver but not before helping to dispatch anoter daemon prince for First Blood. Matt killed his own prince with Warp Storm stuff (more on that in a bit). The big problem though was that the great unclean one and a pile of plaguebearers were too difficult to take down even with massed bolter fire. Ultimately we both got rid of each other's troops and Matt ended up winning the game thanks to Slay the Warlord and Linebreaker which beat my single point from First Blood.

Review of the Daemon Units
Obviously I'm reviewing these from the perspective of an opponent but hopefully it'll give you some insight into what the new codex can offer. I'll do it unit by unit and try to be as unbiased as I can. It'll probably end up as a pretty long post but please bear with me.

Bloodthirster
Allowing Daemon Princes to be troops offers some options for building "big stuff" lists which is always good. Tooling this guy up with some rewards can make an already strong unit, nigh on unstoppable. Grey Knights might present a problem with their force weapons but you can normally single out other models with instant death and get rid of them before they're a threat. As a flying MC it's difficult to stop him getting to your lines. If you've got a ton of shooting then perhaps you can bring him down before he gets to you but it'll be a struggle. He's as lethal in combat as you'd expect but not so lethal that he'll find himself sat in the open and taking fire again with shrewd use of challenges he can easily be kept in combat for two phases.

Much has been said about this guy already. He was a mainstay of Daemon lists in the old codex as he allowed re-rolls of invulnerable saves. Allowing you to re-roll the warp storm dice is useful (more on that below) but obviously his main focus is on psychic powers. With the sheer number of powers available to him he's likely to always get something useful from the generated powers. Even if he doesn't he gets the Change powers which are mostly pretty good. Being Mastery 4 he can get some powerful powers off whilst still swooping.

There's no reason to ever doing anything but swoop either as he's not all that great when not firing off powers. He might gimp a vehicle or two if the opportunity presents itself as he still has Smash but with crap WS and a single attack he wants to be flying around above the action as much as possible. Whilst he lost his re-roll for all invulnerable saves he does allow a single re-roll per turn which is pretty handy. Matt managed to get the Divination power that lets him re-roll saving throws too which made him pretty durable. Without this he's only T5 with a 4++ save so massed firepower should cut him down if he gets grounded.

The problem is the points cost. Whilst he can potentially buff your army with his powers he also ends up buffing the enemy army too. My black knights ended up with 4+ FNP thanks to his Change powers. Whilst he's interesting to use and I have to admit interesting to play against he's unlikely to feature much because he simply costs too much for what he does now.

Great Unclean One
Matt ran him as a Mastery 3 psyker which meant he was also buffing himself and other units with Biomancy powers. He managed to get a 3+ armour and 4+ FNP from his gifts which made him feel pretty unstoppable. The main thing that kept him alive though was Shrouded. He was able to walk across the board behind some ruins which gave him a near permanent 2+ cover save meaning he got to my lines pretty much unscathed. Again he's pretty good in combat but not so good that he'll kill stuff too quickly. He can get pretty expensive but once he's in the thick of things he's likely to make his points back easily. There's the potential for him becoming higher toughness thanks to Biomancy too which could put him beyond the power of most weapons. That's a frightening prospect if you ask me.

Daemon Princes
Pretty similar to the CSM ones. If they're given Daemonic Flight they're infinitely better in my opinion. They're still a big threat as you can't easily get rid of them before they're on you. The sheer number of potential combinations makes them really interesting in this new book. There's an element of randomness to it but some of the options are great. Again pretty pricey at 205pts with flight and armour before you've even started adding other options. With the ability to move them to Heavy Support they can still find a spot in a "big stuff" list too. They're probably more appealing than most of the other Heavy Support choices too.

Bloodcrushers
Again, something we saw a lot of with the old codex. Whilst they've lost Eternal Warrior and only have a 5++ save they've gain an extra wound each. The changes to Furious Charge mean they aren't as deadly as they once were but they're still a bit too deadly if they're run in numbers. What I mean is that they're not all that durable when not in combat and have a tendency to annihilate whatever they charge. This will mean they've got to make quite a lot of  5++ saves and are unlikely to last too long. Being cavalry will help keep them safer but I didn't feel like they were all that hard to deal with. If I hadn't had a lot of other stuff to worry about I might've been able to gun them all down before they did too much damage. As it was they killed a couple of squads of bikers whilst I was distracted by the GUO and Fateweaver.

The only Troops choice that was in use last night was these guys. There's been bitching about them getting worse in this latest book. Personally I think they're better than they were before. Being forced to take them in units of 10 is annoying for Daemon players but they're still doing a similar job to the one they did in the old book. Drop them onto an objective and hope to still be on it at the end of the game. Shrouded combined with an Aegis line or else some ruins means that you've got to put a hell of a lot of fire on them to kill them off. They don't stand up too well in combat of course but they can hold their own thanks to the way Poisoned works now.

I still think they're probably the best troops choice in the book. Easily ignored because they aren't much of a threat and hard to kill if you decide to pay attention to them.

General Codex Stuff
The Warp Storm table provided us with some great entertainment. Matt could re-roll it thanks to Fateweaver so when he got a Warp is Calm result I managed to goad him into re-rolling it in the interests of fun and he scored a 3 which meant the Daemon Prince that would probably have killed the Black Knights was punished by the gods and removed! Otherwise there were +1s to invulnerable saves and a couple of hits on a 6 results. Most of the time I don't think it'll have that much effect on the game but like anything random it could be gamechanging on the odd occasion.

Daemonic Instability is great. I know that might seem a bold statement but frankly I think it's what Fearless should've been in 6th. It's a shame for Daemons that they're the only ones who don't get the tarpit of Fearless but they can still ignore most Morale Checks. It's a shame Fearless isn't more like it for other armies.

Losing Eternal Warrior is a big deal for most Daemon players. However, with the decline of armies like Space Wolves with massed S8 fire, there aren't all that many things around that'd cause a problem. Grey Knights are the only army with enough Force Weapons to cause an issue and they're supposed to be good against Daemons right? Otherwise you can usually pick out the librarian or whoever has the instant death weapon and then you're back to pretending you still have Eternal Warrior on your Daemon Prince. There really isn't that much S10 around.

As I've mentioned, the rewards have the potential to make good units great. One of the interesting other upgrades though is the Portalglyph. Whilst it isn't hard to kill an AV12 single hull point model, it's very easy for it to get ignored. It then has the same sort of potential as a Tervigon in that it can flood the board with troops. Getting rid of it as soon as possible is my advice!

Conclusion
There were concerns that the randomness of the book would mean you couldn't use it competitively as a primary detachment. I really don't think that's true. It may not be up there with the Necrons (but what is?) but it's still got some really strong options that a lot of armies simply won't be able to deal with. Sure the randomness might punish you but it can also help!

I'm hopefully going to get more games against Matt's Daemons soon but I'm away for a week or so now so the blog will be a bit quiet.
Posted by From The Fang at 11:09:00