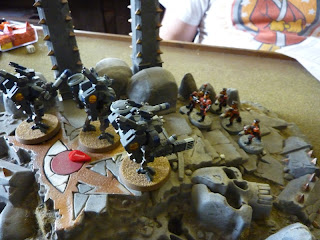 Yesterday was my birthday so I'm posting these a little later than planned. I got a bit carried away with the report from the first battle so I'll try to keep the remaining two brief. Here goes....

Game 2 - Tau vs Imperial Guard
Drawing the first game put me firmly in mid-table. I was worried that I'd meet something a bit off the wall so was pretty pleased to be facing Dan's Imperial Guard. I'm always pretty confident against IG because I can usually beat them for both range and accuracy. Dan had 5 veteran squads in 2 vendettas and 3 chimeras with a command squad in a fourth chimera. These were joined by 3 Leman Russ and a couple of sentinels which would outflank.

We'd be playing Dawn of War and Annihilation. Dan's list probably edged mine for KPs but there wasn't much in it. Luckily for me I'd be shooting first but the table contained a frankly horrific amount of line of sight blocking massive buildings. This would really hamper both of us but I decided (after much deliberation) I'd rather be the one hiding behind them then letting my opponent stay out of sight and force me to close range. With all those veterans and melta/plasma I'd want to keep them at arms length. Nethertheless I elected to deep strike my commander teams in the hopes of getting melta shots on his tanks and then charging the occupants with my S5 suits. Obviously with it being DoW neither of us deployed anything so we proceeded to walk on in turn 1.

Dan walked on everything but his sentinels and since the latter only had scatter lasers I wasn't too worried about them as long as I kept my devilfish moving. My first broadside team to shoot blew up both vendettas straight away and the resulting explosions killed off half of the veterans inside. One squad was pinned but sadly both held their nerve and didn't flee. The rest of my shooting was less successful but Dan's response was equally unlucky with his Leman Russ's failing to find range or scattering off target (which was the story for the rest of the game.

Dan's sentinel arrived in turn 2 and failed to hurt the nearby devilfish with shooting and only shaking it in combat. They soon fell victim to the nearby missile team. The next few turns saw one of my commander teams deep-striking in, killing a leman russ and then taking a crapload of melta/plasma fire leaving a single suit on his own. He tried to kill a chimera but failed with shooting and assault leaving it stunned. He obviously died quickly after. On the right flank I pushed my devilfish forwards and rapid fire, helped by the pathfinders, easily dealt with the veterans that were without their transports. Dan eventually managed to kill off a devilfish but at the end of turn 6 (no random game length in this mission) the game was most definitely a whitewash. The only thing that survived was half a veteran squad who would've died had I not snake-eyed my battlesuits move through cover roll and missed out on an assault.

Conclusion
One of those games that isn't good for either party as my army did what it does best with disgusting efficiency. Dan stayed in a good humour about it though and it was enjoyable all the same. After a devastating first turn from me Dan understandably played a bit cautiously. I think if he'd advanced his army and got his melta/plas vets into range in their chimeras it could've been very different. The full points from this game would definitely propel me to the top tables. 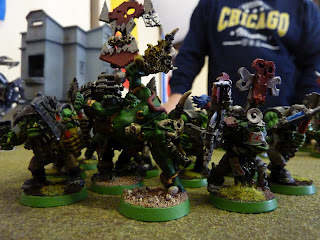 Feeling a bit light-headed playing on table 3 with my Tau I was surprised to find I was pitted against Orks. Looking at the results table I was a little gutted to have narrowly missed out on playing another IG army but knowing that trukks died easily to my army I was still fairly happy. My opponent, Andy, shared my philosophy of bringing something fun along rather than a hardcore tournament list (although with hindsight his list was still very competitive). He had Ghaz with meganobz in a battlewagon, 2 deffkoptas, 3 units of boyz in trukks and Zogwort with a pile of nobz in a final trukk. We'd be playing a VP mission with control points that gave 100 VPs per turn they spent being controlled.

If I could get first turn this could be over pretty quickly. Of course I didn't manage it so I knew I find myself in combat by turn 2. In a surprising turn of events Andy managed to blow up one of my devilfish with his deffkoptas and stun the other (thanks to me failing cover saves). Thanks to L-shaped deployment one of the boyz mobs hit my pathfinders on turn 1 (stupid of me to put them that far forwards really). However, Andy was most excited about the prospect of turning my commanders into squigs and the first time he tried it he rolled a 6 and I failed to match it meaning I was now the proud owner of a bright red squig. Undeterred I decided to make the most of my new "assault" unit and sent him in the direction of one of the deffkoptas. Miraculously he held the deffkopta to a drawn combat which was nice. 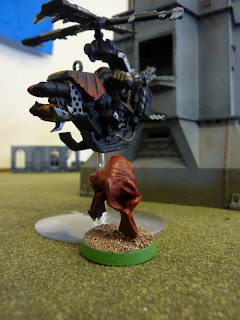 Elsewhere my army did as expected and blew up pretty much every transport in the ork army. The only exceptions were Zogwort's trukk which was immobilised and the empty one which I ignored. One of the boyz mobs was pinned and took a few casualties from the nearby fire warriors. The squad which had killed the pathfinders was cut in half by some more fire warriors since I'd decided to keep them out of their transports to give me all the firepower I could get.

Turn 2 saw the inevitable Ghazghkull Waaagh! and the result was that Zogwort's nobz got a multi-charge on my stunned devilfish and commander team. Zogwort found time to make this commander into a squig too (he only rolled a 3 but I obliged with a 2, much to Andy's delight). Needless to saw I lost both the transport and the command team. Ghazghkull inflicted some overkill on some more Tau as well. However, all of that paled into insignificance when my squig managed to take down the previously wounded deffkopta!!! He then went and hid for the rest of the game to keep hold of the commander's VPs!

My army slowly picked off all of the orks apart from the nobz and meganobz (with their special characters in tow). The rest of the game would basically be me playing keep-away with JSJ moves and hoping to gun down the orks or at least pin them/make them run. Both nob mobs killed a broadside team each and then set about chasing the rest of my army around. Zogworts squad resisted a lot of fire thanks to Cybork bodies and FNP. Andy made a disgusting number of 5+ saves I'd like to point out! I was still pretty sure I could keep them at distance though and I'd scored 200 VPs from the control points. Both of his squads were pricey though so at least one had to go. Ghaz spent the game chasing a missile team around eventually killing one of them with shooting but taking no casualties since he never failed a 2+ save! 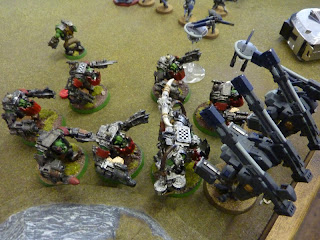 Zogwort's nobz were chasing the squig's crisis bodyguard (without their commander of course), missile team and a devilfish full of fire warriors. I was content in the knowledge that they'd not be able to charge me until Zogwort rolled a 6 for a well timed bonus Waaagh! Of course Andy rolled a 6 to run and caught the bodyguard team for a costly amount of VPs. With no other options I had to disembark the fire warriors and hope that with help from the 'fish and the missile team they'd force they gun the nobz down or at least force them to run. There were only 4 orks left in this team with Zogwort on 3 wounds, 2 klaw nobz with a wound each and the painboy with both his wounds. I just needed to kill one of them to force a morale check. After all my shooting (and some more sickeningly good saving throws) the 4 orks were still there with a wound each left. I should've insisted on making Andy assign the wounds properly as he rolled for all 4 on the same colour dice and then chose to put the wounds on Zog and the painboy but he'd let me off with stuff so I'd have felt harsh doing it. Totting up the VPs we found that with the help of the control points I'd managed to hold Andy to a draw with only about 100 VPs between the two armies. I finished in 16th just above the halfway mark.

Conclusion
This game was really frustrating thanks to bad luck on my part and amazing luck for Andy. That being said it was never going to be easy going second against Orks but I felt I put in a good show. The clincher of the whole thing was that bonus Waaaagh! which came just at the right time for Andy to catch my suits. Without it the bodyguard would've surely killed them off and won me the game.

Can't complain too much though since Andy was a great guy to play and it was a fantastic game with some really random orkyness which I loved (even though it hurt my army a lot). Coming away from a tournament knowing that you were undefeated with a Tau army is pretty satisfying. Knowing that the difference between drawing and victory was as simple as a dice roll is less than satisfying!! It didn't make my performance any better when every other person reminded me that a Tau player had won the 40KUK GT last month!

Time to retire the Tau for now and try out my Dark Eldar at Blog Wars 3. Before I put them away I'll post up some after action thoughts on Tau tactics and my list in general. Hopefully tomorrow but we'll see if I get chance.
Posted by From The Fang at 18:00:00