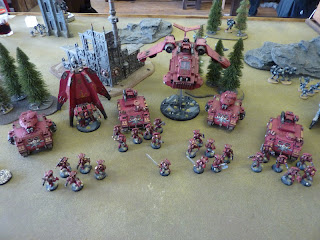 As I've mentioned in other posts I decided to give my Tau one last run at a tournament this year after a promising performance at Jolly Toys. The main changes in the list were the addition of target locks to my broadsides and targetting arrays to my other suits. I'll be discussing the list's performance tomorrow so check back then if you're interested.

I knew from Jolly Toys that if I met the right opponents I'd actually have a decent chance of placing well. I'd need to be playing against mech heavy armies, preferably MSU (as I don't have a ton of anti-infantry firepower). This means that winning the first game is important because the top tables tend to have the mech lists whereas the lower half have a greater variety.

Anyway, onto the battles!

Game 1 Tau vs Blood Angels
When I saw that I was drawn against BA I just prayed that there'd be no jump packs. I knew Mephiston would be likely but my commander teams should be able to alpha-strike him if he's in the open. Si's list had a stormraven, two baal preds (ACs), two las-plas razors with assault squads plus priests, a 10-man assault squad with priest, furioso in a drop-pod and, as predicted, Mephiston! Si was using chaos models as his BA (as you can see in the picture) which was a welcome change and looked great on the table.

The first mission was Pitched Battle and 5 objectives. Looking at his army I knew I could do with first turn since I'd like to be shooting at his tanks before that dreadnought hits on the first turn. Not only that but the stormraven would certainly be easier to kill without it having a cover save. Even so, I'd still be relying heavily on the damage table rolls. He'd undoubtedly put Mephiston inside so killing that would need to be a priority. All this planning went out the window when Si beat me in the roll off.

The predators used their scout move to get right into my face but since most of my army had cover I wasn't too worried about them. I knew I'd need to get rid of the las-plas to avoid any instant death for my suits. The first turn for the BA saw them shoot absolutely everything into the central broadsides whilst one assault squad stayed behind to hold an objective. I made a sickening number of armour, cover and invulnerable saves and the full force of the Blood Angels could only kill the two drones leaving the broadsides unscathed. I'm pretty sure Si had forgotten but being an honest sort I rolled a morale check for them which I failed! They were about 6.5" from the edge so I obviously rolled a 7! That really hurt the plans for my turn. 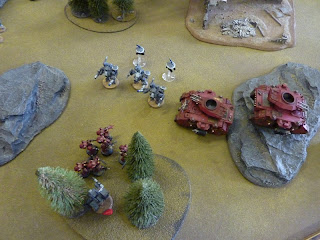 Seeing the dreadnought was nice and close to one of my commander teams I decided to move in to try and take it down nice and early. They penetrated but only blew off a weapon. This was the first of many poor damage table rolls. The next targets were the two predators (since other things were in cover). Essentially my shooting managed to shake the stormraven (thanks to it's extra armour), stun a predator and wreck a razorback. All in all pretty pathetic. The main mistake was using the pathfinders on the dread and one of the predators rather than on the stormraven. Frankly, I'd forgotted that it would have a 4+ save from zooming forward.

Suffice to say Mephiston dropped from the storm raven and slammed into a commander team easily finished them off thanks to Sanguine Sword. The assault squad deep struck in near the centre and the storm raven moved another 24" to the centre. The next few turns saw my pathfinders get clobbered (to be honest Mephiston was wasted on one of them) and me failing to do anything to the damned stormraven with my single broadside team (but I did kill the dread before it did me much harm). All but one devilfish dropped their drones (the other died) and I used them to move towards objectives for irritating contesting. I eventually wrecked the other razorback but the assault squad went chasing one of my devilfish. The melta missed the first time and stunned it the second.  Mephiston worked his way through more stuff until he was in range of the other commander team. 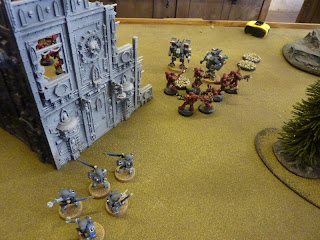 Turn 3 was the turning point for me as my damage table rolls finally came good. The fire warriors jumped out of their stunned devilfish and rapid fired the squad and with help from the broadsides forced them to run. The broadsides wrecked a predator and the other was taken by the remaining missile team. This left my opponent with one assault squad hugging an objective, one large assault squad in the middle and the damned stormraven. I moved my missile team and fire warriors round towards the small assault team on the objective and thinned them out a bit, knowing they wouldn't assault as they'd give up the objective. The large assault squad moved onto one of my objectives.

At the end of turn 5 I had one devilfish on an objective and Si had two assault squads on the others giving him a 2-1 lead. Luckily he rolled a turn 6 and I was able to move my crisis teams in to contest both objectives. The remaining commander team rapid fired their low-AP into the large squad and forced them to go to ground to avoid leadership tests. This meant even if we got a T7 I'd be safely contesting and could try to wipe them out. At the end of turn 6 all 3 claimed objectives were contested. All I needed to do was kill the stormraven to win the game 1-0. The broadsides penetrated twice and Si made one cover save. The difference between a draw and a win came down to a single 50-50 (thanks to AP1) dice roll. I rolled a......3! Immobilised the bloody thing and Si held onto a draw with me claiming a narrow VP victory. 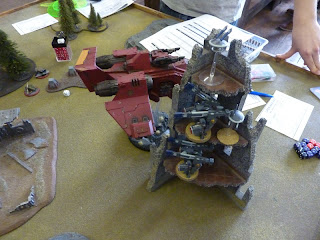 With the start I had I was pretty thrilled to pull it back. I was pleased that I kept my cool and played the mission which to be honest I never do! To put myself in a position where I could win after some heavy losses and bad luck with vehicle damage was very satisfying and understandably frustrating for my opponent. The clincher was definitely the turn where I blew up both predators and killed Mephiston!

Sorry that turned into a bit of an epic. I'll try to keep the other two battles shorter but I'll post them up tomorrow!
Posted by From The Fang at 18:00:00