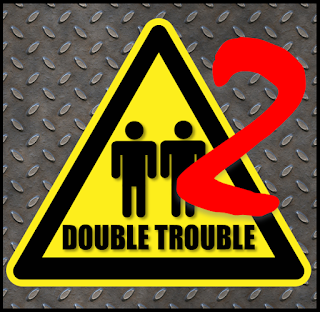 What is Double Trouble?
Double Trouble is a Warhammer 40,000 doubles tournament with a difference. Instead of writing an army list together with a partner, each player will write their own 750pt army list from a single faction of their choice which becomes their "Force". Before the first round you will be randomly assigned a doubles partner combining your "Force" with theirs to form an "Army". You'll then play against another random pairing and their "Army". The allies chart will not be used, therefore all combinations will be treated as Battle Brothers.

At the start of the next two rounds you will be assigned a new random partner. This means you'll get to play three games with 9 different people and hopefully a good variety of armies.

Tickets
Tickets are on sale now and cost £17.50 per person with 40 spaces available. Your ticket entitles you to 3 games of 40K, lunch, free entry into the raffle and, a chance to win spot prizes throughout the day. Please note: no refunds will be issued for players who drop out after the list submission deadline (see below). This is because prizes will have been purchased and food ordered. Of course, if I have to cancel the event (hasn't happened to me yet), everyone will receive a full refund regardless.

To purchase tickets, please send £17.50 per ticket to alexjbrown58@hotmail.com via PayPal (using the Friends and Family option). Please include your preferred contact email address along with email addresses for anyone else you're buying a ticket for. Please also include the dietary requirements of everyone you're buying a ticket for (even if it's just to say there aren't any).

The venue is pretty close to Stockport railway station, so it's worth considering the train as an option. There's also a Premier Inn across the road for those who want to stay over the night before/after. Room rates increase in price closer to the date so, if you intend to go for this option, I recommend getting it booked early.

Event Schedule
There will be three 1500pt games of 2.5 hours each. The schedule for the day is as follows:

Please try to arrive well before 9.30 to allow registration to be completed and the first game to start on time. Every effort will be made to run to time but unexpected delays can occur.

Prizes (kindly sponsored by Element Games)
These will take the form of store credit with Element Games (the in-house hobby shop) who offer discounted GW products. The awards will not be given out in the same way as they would at a singles event (or even a normal doubles event) instead they'll be as follows:

Note that there's no prize for highest combined points total. Bear in mind that both players in a team will receive the same points for a game so you still need to work together even if ultimately there can be only one winner (well, two but you get my meaning).

There'll also be a painting competition with prizes for the following:
Each player will only be able to enter one category of the painting competition so they'll need to choose the one they feel they'll have the best shot at winning. With such a low point total for your Force, it's a great opportunity to really go to town on an existing army or even start a new one especially for the event!

There will also be a series of spot prizes throughout the day and a generous raffle at the end. The specifics of these prizes will be announced nearer the time when numbers have been confirmed.

There's an equal weighting to the tournament prizes and painting prizes but the top raffle prize will be worth the same as the prizes in either category combined. This is completely intentional and hopefully encourages people to write their lists with the spirit of the event in mind. Basically, you could bring a horrible list that isn't fun for you, your partner or your opponents and win £20 and a crappy certificate or you could bring something a bit different that's more fun, enjoy your day more, piss off your opponents and partners less and win in the raffle anyway!

Refereeing
I'll be hoping to play in the event but I'll be available to making rulings or answer any queries.

That being said, I hope this won't be necessary most of the time as it's intended to be a friendly tournament. Please try and use the relevant source material to solve any issues. I'll be happy to provide a final adjudication but this may simply be to ask you to roll off where the rules are unclear.

As ever, please try to contact me in advance with rules queries so that rulings can be made before the event thereby saving time on the day.

*Note that Astra Militarum have a small exception in that you may take two Infantry Platoons but each Platoon can only include three infantry squads (allowing six per Force). The other components of the Platoon are excluded from the no more than two of a unit rule.

Imperial Armour/Horus Heresy armies and Forge World 40K legal units ARE permitted. That being said, armies must still comply with the above restrictions. Please don't make me regret allowing FW!

Secondary Sources
Dataslates are permitted and form part of the army as detailed in their particular rules. Supplements for any Faction are permitted provided they are still valid with the current version of their parent codex. If in doubt, contact me to make sure.

Electronic versions of codices/supplements are acceptable, however, please ensure your tablet/phone is fully charged before the event so that the "books" can be accessed throughout the day if necessary.

List Submission
Lists must be submitted at least two weeks before the event (May 27th 2017) to allow for checking and resolution of any queries. A reminder email will be sent out a few days prior to the deadline.

I'd be grateful if lists could be submitted as Battlescribe .rosz files to make checking easier but if not please at least indicate the type of detachment/formation you are using.

Modelling & Painting
"Counts as" and proxy armies are welcome as long as it is clear to your partner and opponent and that there is no gaming advantage to be gained from using it. If in doubt please check with me BEFORE the event by email and include pictures if necessary.

Ideally armies should be fully painted but a minimum of three colours and appropriate basing is required. Unpainted models are not acceptable.

Scenery
Scenery will be provided by the venue and will be set up prior to the event. Please note that the scenery will be deliberately set up so that some tables provide more dense cover than others. If you and your opponent are unhappy with the scenery provided, come and find me and it can be re-arranged. Please try to avoid doing this though in order to prevent delays.

Matchups
As mentioned above, doubles pairings will be random in every round as will opponents.

The scores for each doubles pair will be recorded with each player in the pair getting the same score. There will be no secondary objectives in play e.g. Linebreaker, Slay the Warlord etc.

Tactical Objectives
Used as per the rulebook mission "Cleanse and Control" except:

Deployment Types
Deployment in each round will be as shown in the following diagrams:

Game 1 - A nice simple "Dawn of War" to start things off. 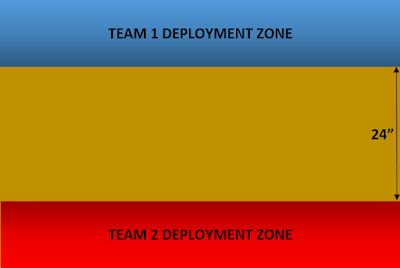 Game 2 - "Vanguard Strike". I know it's a pain in the arse to set up but I think Hammer & Anvil would penalise some armies too much. 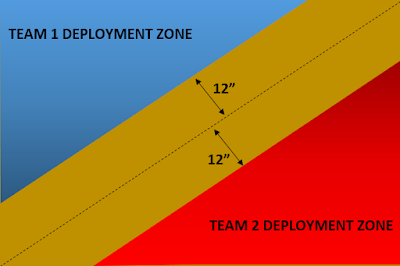 Game 3 - Not as drastically different as the final game last time but a little variation at least. Dawn of War deployment but teams take it in turns to deploy their forces. One of the two players on each side will deploy their full force before a player from the other team deploys there's. Then the remaining two players will deploy one after the other.

The scores from each round have no bearing on your placing in subsequent rounds and are simply used to determine the winners (and loser) at the end of the day.

Each player will be issued a score sheet at the start of the day. Losing it will result in ritual humiliation and general grumbling from myself.

Warp Charge and Daemonology
The maximum number of warp charge points that may be generated is capped at 12 (plus the additional D6 each turn) for the combined army. Any excess warp charge is lost. Whilst Malefic Daemonology is allowed, only armies with the Chaos Space Marines or Chaos Daemons faction may make use of it. Please consider the spirit of the event before submitting a list that relies on summoning hordes of Daemons.

Armies may not break the "No unit may be taken more than twice" restriction with summoning i.e. if you start with two units of pink horrors, you couldn't summon a third. However, if you completely lost one of the two units you could summon a replacement for them.

Saves & Re-rolls
A re-rolled invulnerable OR cover save may not be passed on anything better than 4+. That means your unit is still pretty damn durable but your opponent should at least feel like they have a chance! This does not apply to armour saves as they can be taken away by low AP weaponry.

When deciding which is the "best save" for a unit you do not take re-rolls into account. For example, a Ravenwing biker's best save is his 3+ armour and not his 4+ re-rollable cover save. Note that a unit which has a 3+ armour AND a 3+ cover save could choose either.

Invisibility
The Invisibility psychic power from the Telepathy discipline will not be in use. If you roll this power during the pre-game generation of powers you may re-roll the dice until you get a different power.

What do I need to bring?
You will need:
What do we get to eat/drink?
The venue is providing lunch for us (included in your ticket and most likely provided by Subway) and has a bar selling drinks, chocolate, crisps, etc. We will have table service from the bar throughout the day so there's no need to move during games if you're feeling lazy! Buying your partner and/or opponents a drink is encouraged!

Contingency for Drop-outs
There's nothing worse than being told you've received a bye when you were hoping to play three games of 40K for your money. Here's what I propose:
I think it's important to have this contingency plan in place so that people feel reassured that the system will work and everyone will get their three games.

Current Entrants List
Names of those who have purchased tickets will appear here after tickets have gone on sale. There are a maximum of 40 places. Should the event sell out I'll start a list of reserves.