A very short post tonight for a very short section of the codex. On a personal note I still find it frustrating that some books have just two options for Troops whereas others, such as Eldar, have an array of options. Anyway, here are Matt's thoughts: 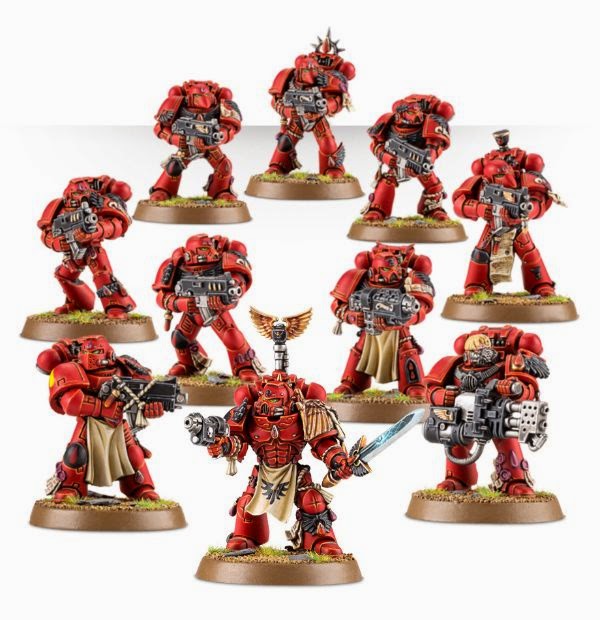 The troops section only contains Tactical Squads and Scouts. Now, often players these days will just run Scouts as they are the cheapest and offer other bonuses such as Scout and Infiltrate for getting onto objectives etc. However, in this codex I do think tactical squads are worth more consideration. This is mainly because they have access to heavy flamers. Heavy flamers are great at the moment, many armies run large and/or many infantry squads and often these have low armour ratings and rely on cover, even against heavy armour flamers are good just because they can cause a lot of wounds from a single shot. In addition to this it is worth noting that a heavy flamer is an Assault weapon, this makes it the only heavy weapon that can be fired before charging into combat, which suits the Blood Angels down to the ground. If you really wanted to go template crazy a full 10 man squad can fire 4 flame templates if you take a heavy flamer, flamer and a sergeant with 2 hand flamers (or a 5 man squad with 3 templates of course)! Drop that out of a pod next to a cover hugging infantry unit and watch it disappear.

Also don't forget tactical marines, like everything else in the codex, have Furious Charge which makes them much better than regular marines on the charge. I think I will probably run a mixture of Tacticals and Scouts in my lists, Scouts still have a place and are very useful (even if that utility just comes in the form of keeping points costs down).

Generally speaking then the Troops section here is the same as in the SM book. We all know that if they weren't compulsory we wouldn't take them any more. Since the faction detachment is pretty much a given there's no Objective Secured to worry about so I'm thinking the general rule of thumb will be min-max with basic Scout units. The Elites section is more interesting....
Posted by From The Fang at 17:00:00