I say this every time but the standard of painting was particularly high this time around. There were several armies that I'd have been happy to see win the best army and plenty of characters that could've taken that prize. As a reminder there's two prizes up for grabs, Best Painted Army and Best Painted Special Character. Yet again we managed to avoid a situation where the same person won both!!

Of the field of 38 players, 33 of them voted which is fantastic as it's nice to see people supporting the hobby side of the event too. It's also a better turn out than a general election.

Best Army Runners Up
This category was a closely fought affair with the winner scoring 7 votes and two players tied for second with 6 votes each. The first being Ben Greaves, playing in his first Blog War, with his tank heavy Astra Militarum army featuring Pask Ben's army has a beautiful weathered look to it with fantastic attention to detail. 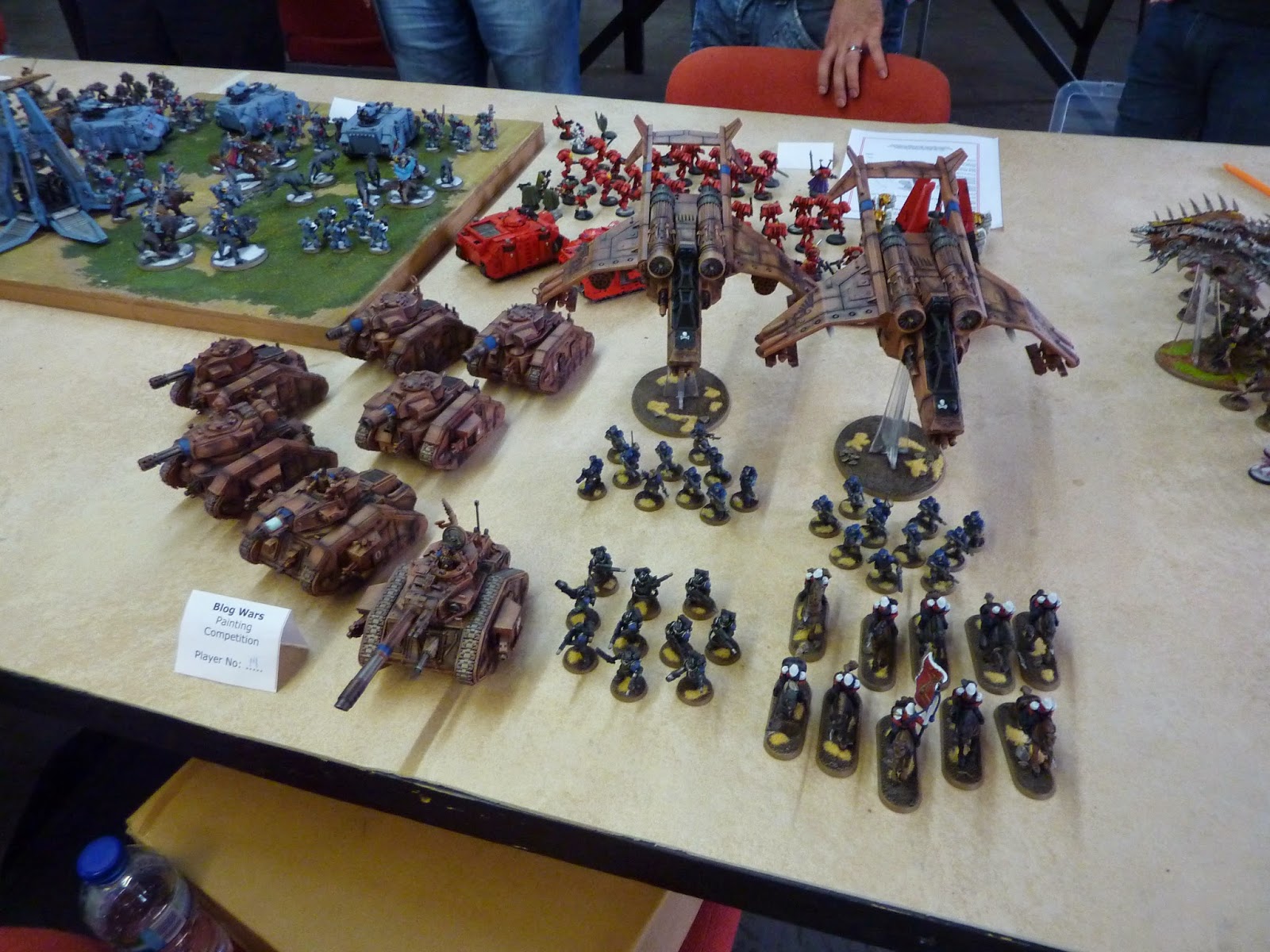 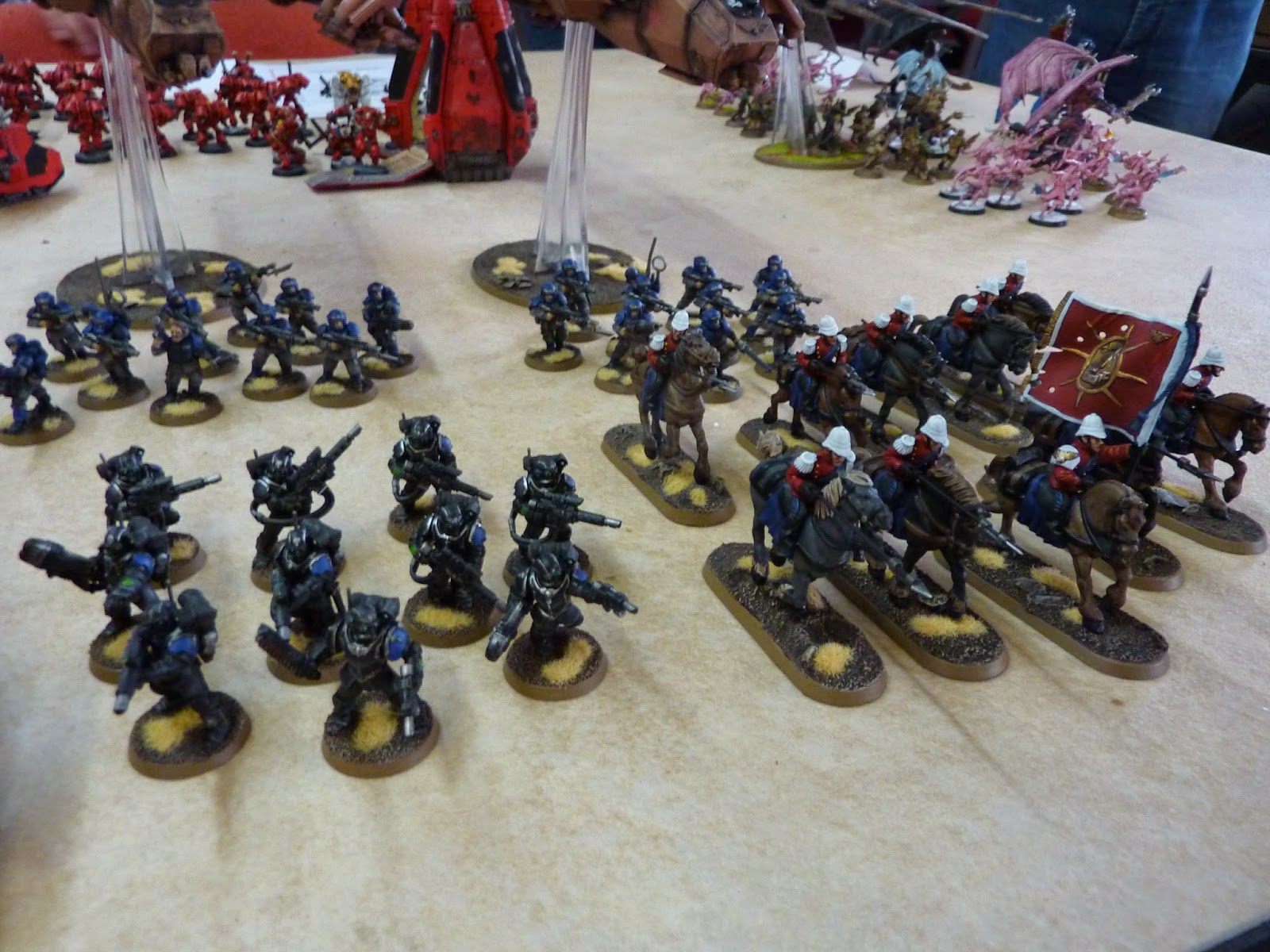 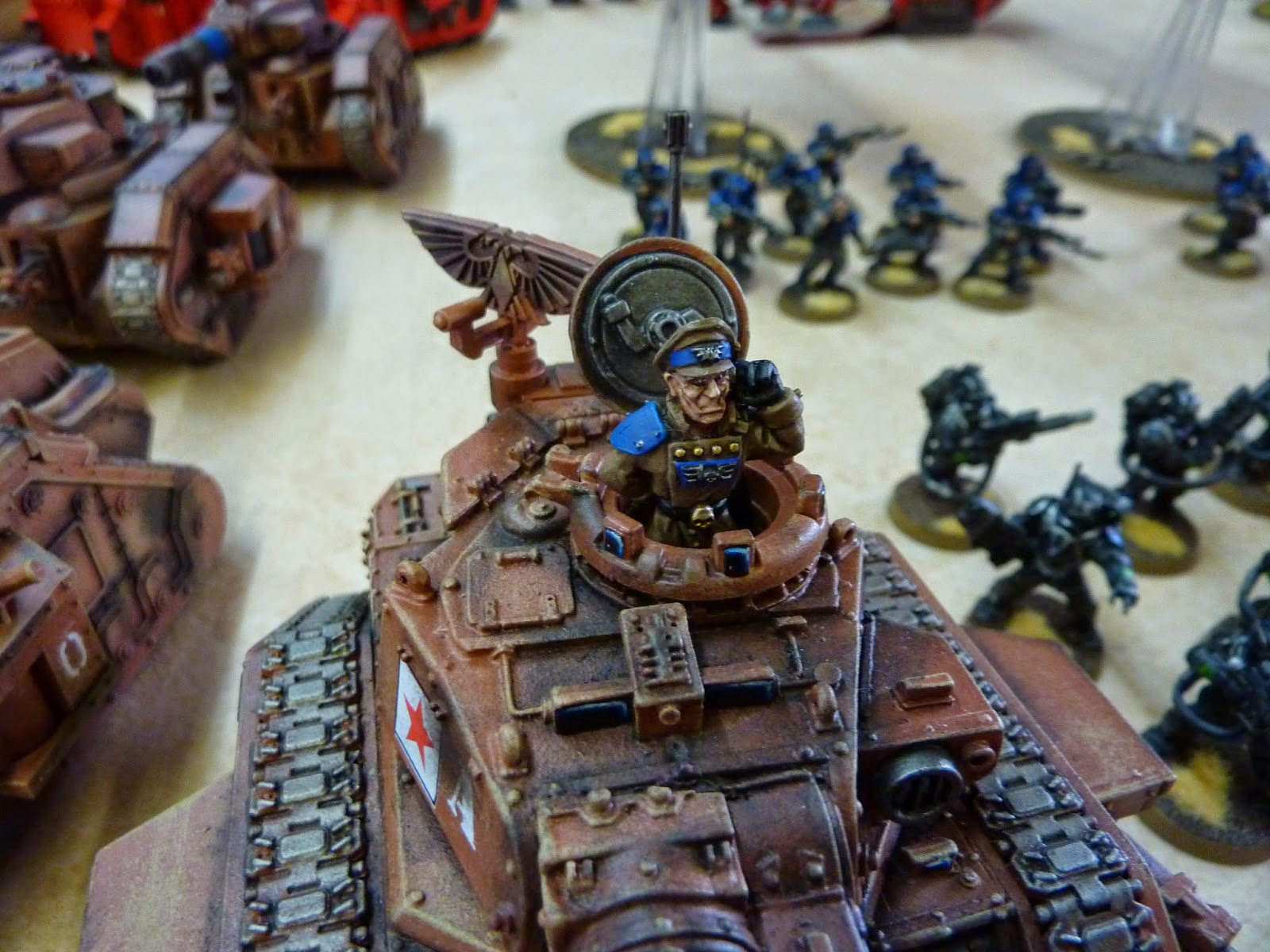 The other player tied at 2nd was Dave Weston with his Tyranids. Dave's Tyranids have won numerous awards including Best Army at BW6 where he won despite them being presented on a red plastic tray. This time Dave had gone to town on his diorama as you can see in the pictures. I feel a little guilty that he put that extra effort in only to come second! 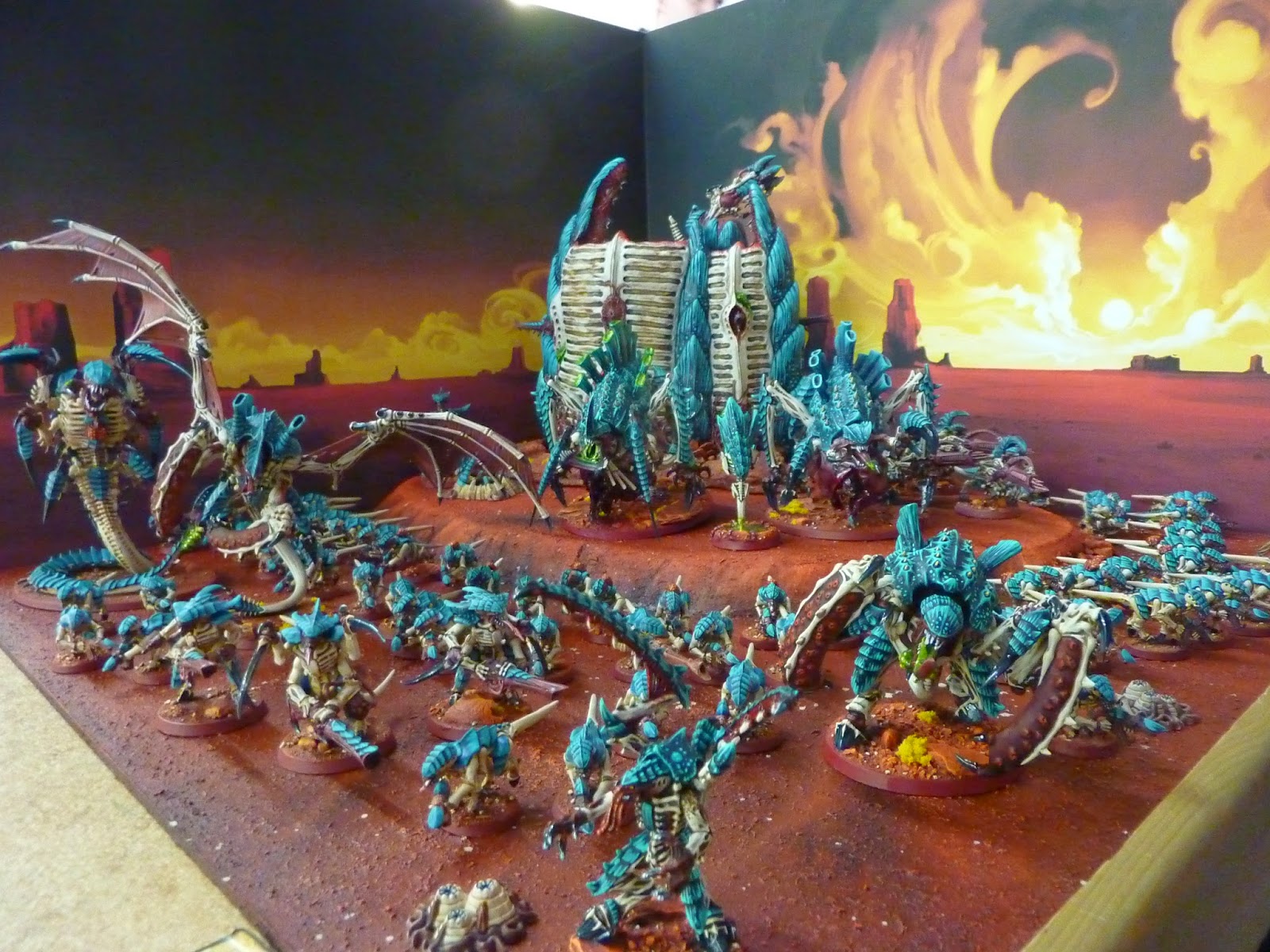 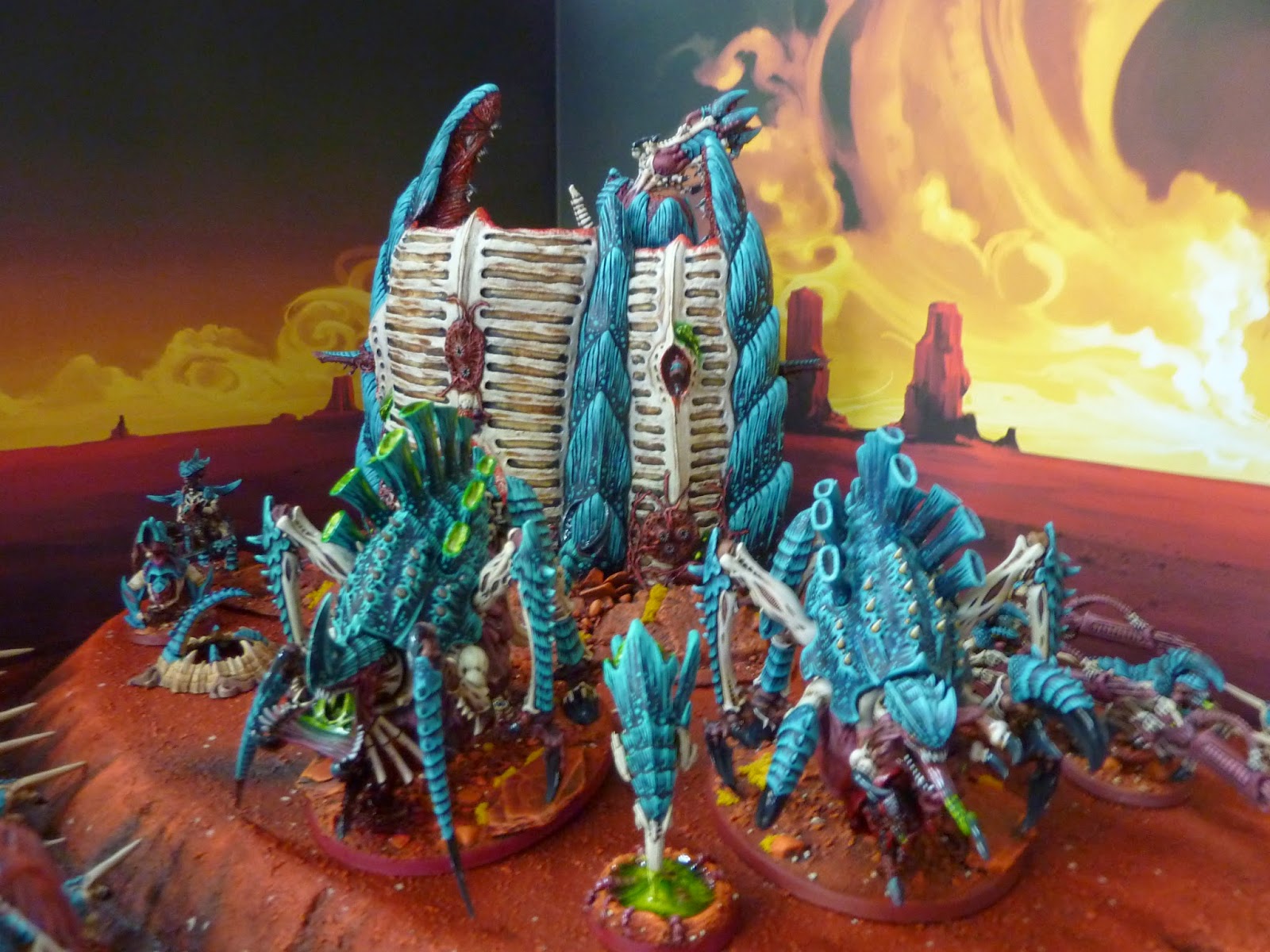 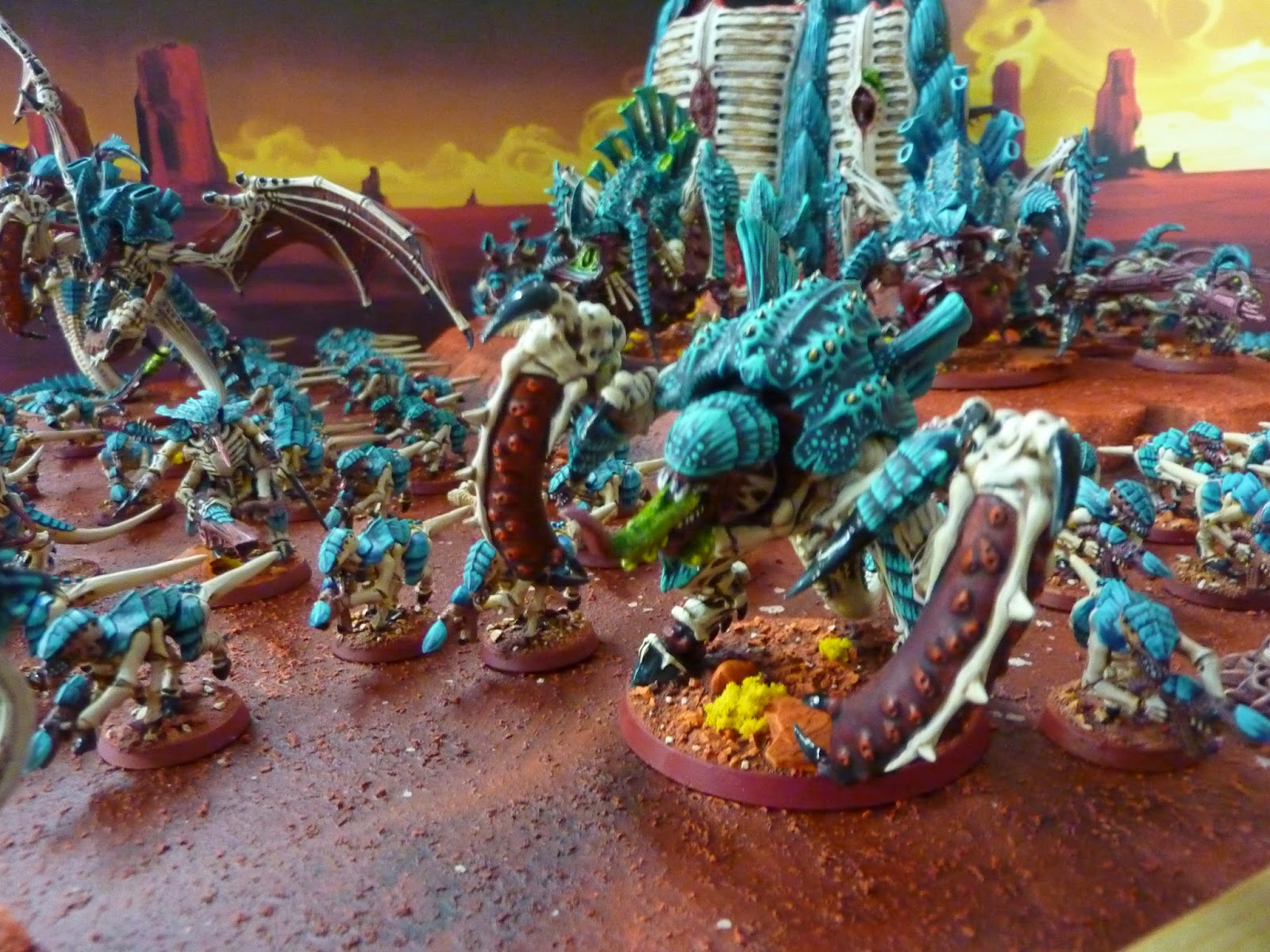 In fourth place with 4 votes was Martin Waine (another newcomer) with his Space Wolves featuring Canis and a whole host of wolves around him. 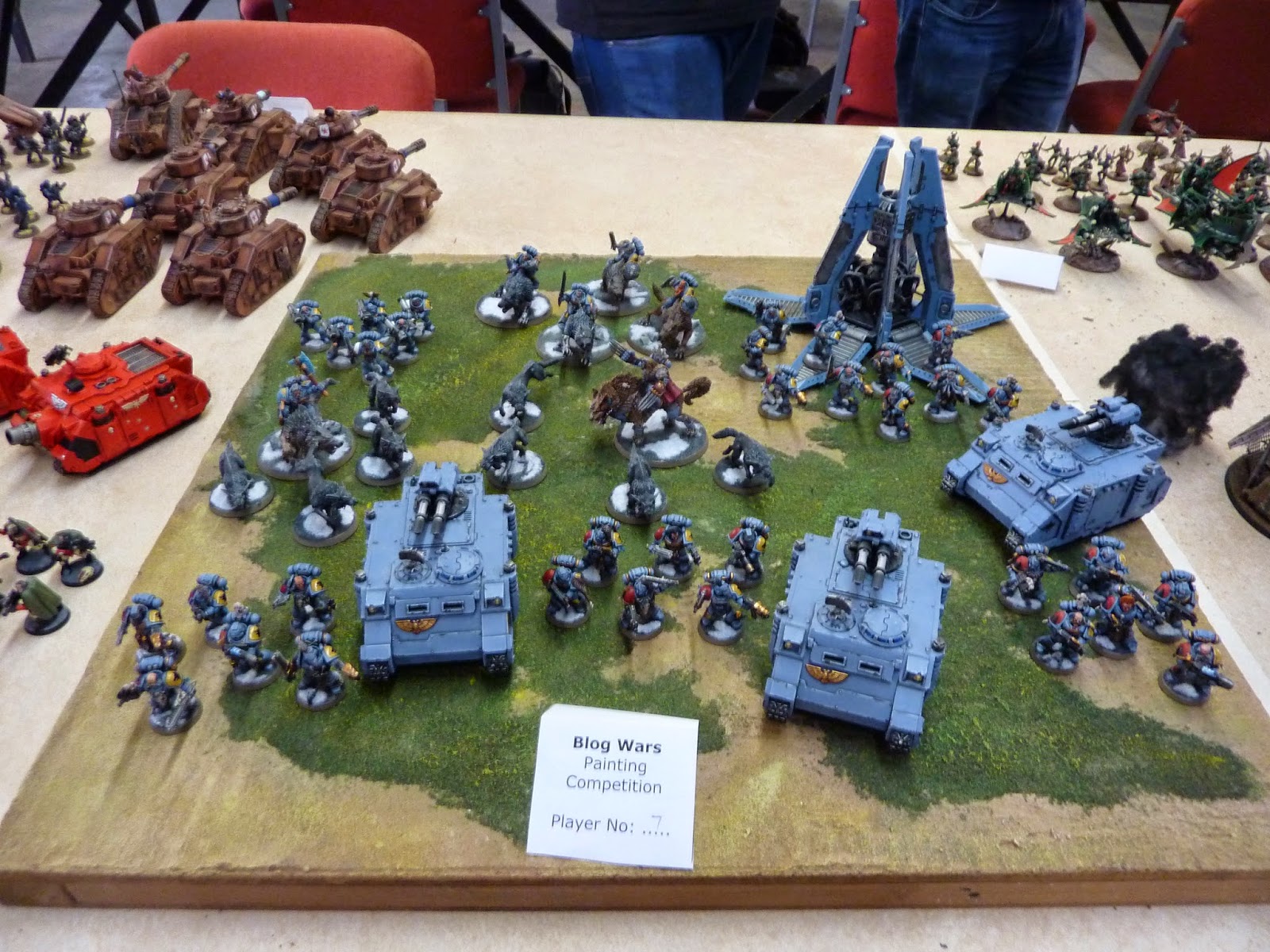 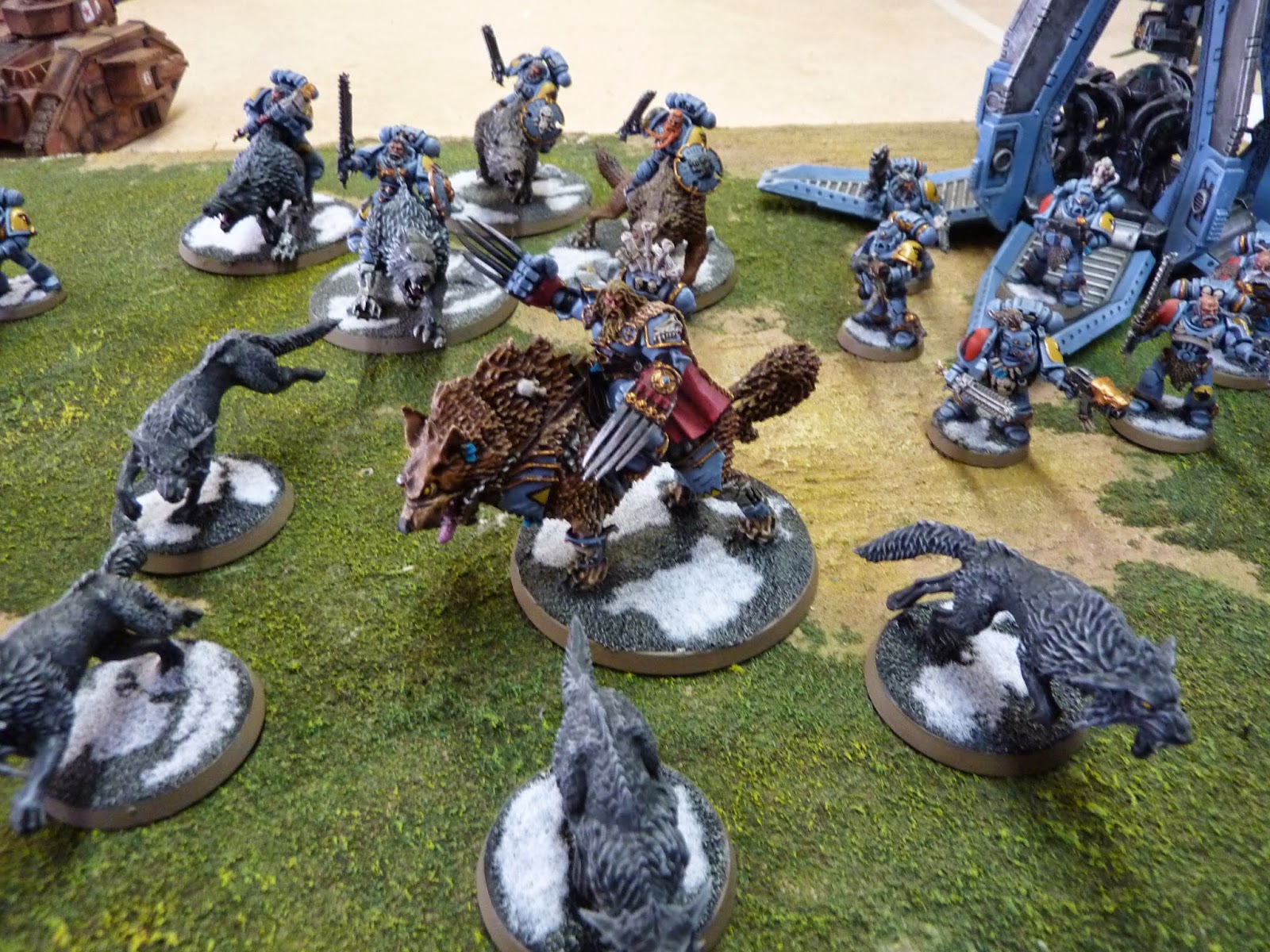 Best Army Winner
The winning army was Chris Benstead's stunning Iron Warriors army which features some excellent conversions, third party models and a well executed paint scheme that makes them really look gritty. Chris is one of only three people who've been to all seven Blog Wars events and he's always performed well in the painting competition winning Best Special Character twice and now also two awards for Best Army. I should point out that these awards were not all for the Iron Warriors, as in previous events Chris brought his equally beautifully painted Tyranids with Swarmlord. He also came second at BW5 meaning he's probably taken more prizes from me than anyone else!! I wonder why he keeps coming.....

Anyway here's some shots of his army but for more pictures and details of his conversions please head over to Weemen. 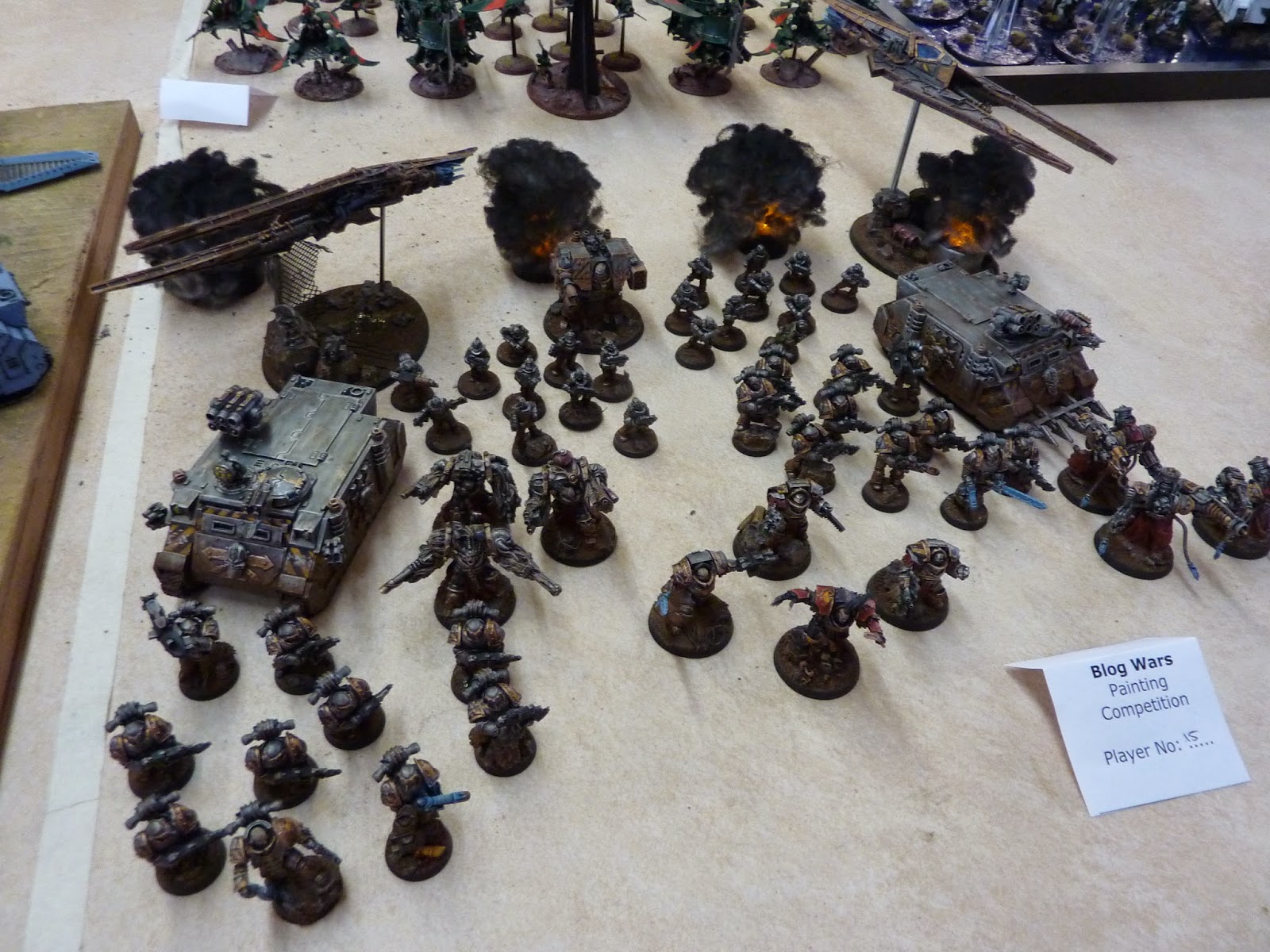 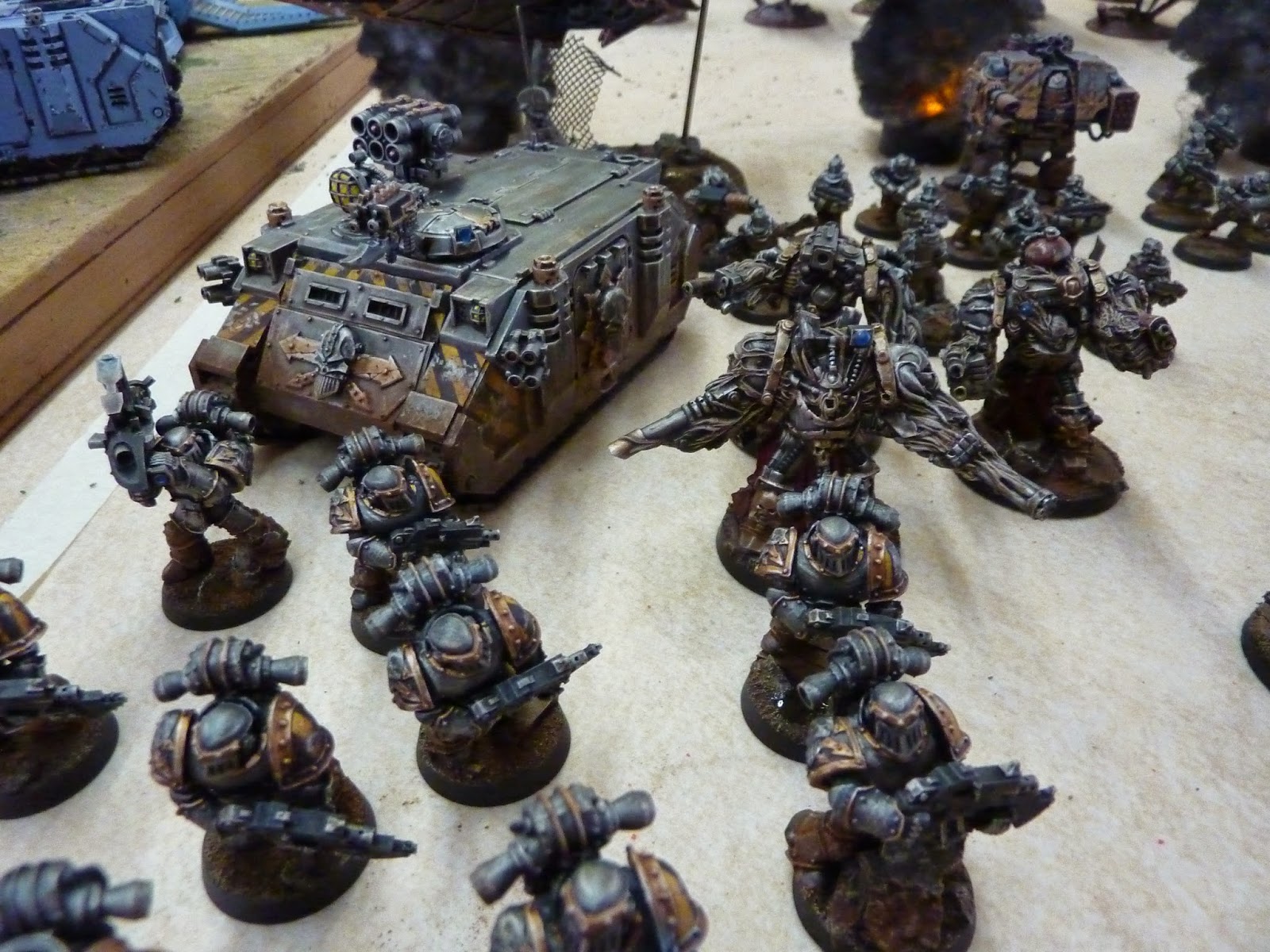 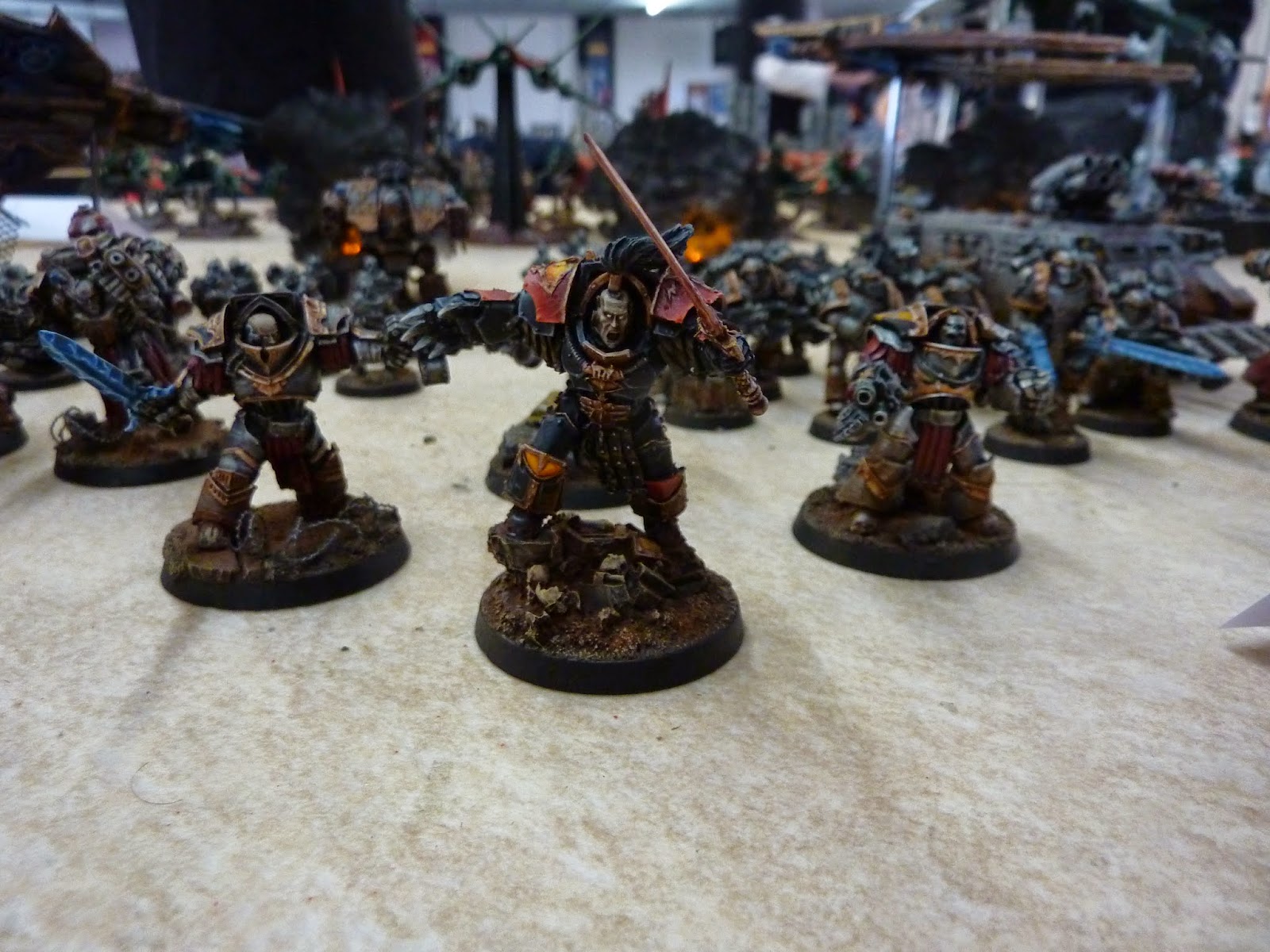 Best Special Character Runners Up
This category was even closer with the winner scoring 6 votes, two players tied for second on 5 votes and a three way tie for fourth at 3 votes each. Martin Waine featured here again with his Canis Wolfborn tied with Michael Towers Sanguinius (counts as Mephiston). The three way tie for fourth was between Nathaniel Gibbs' Draigo (resplendent in gold). Chris Benstead's Abaddon and Dave Weston's Deathleaper. 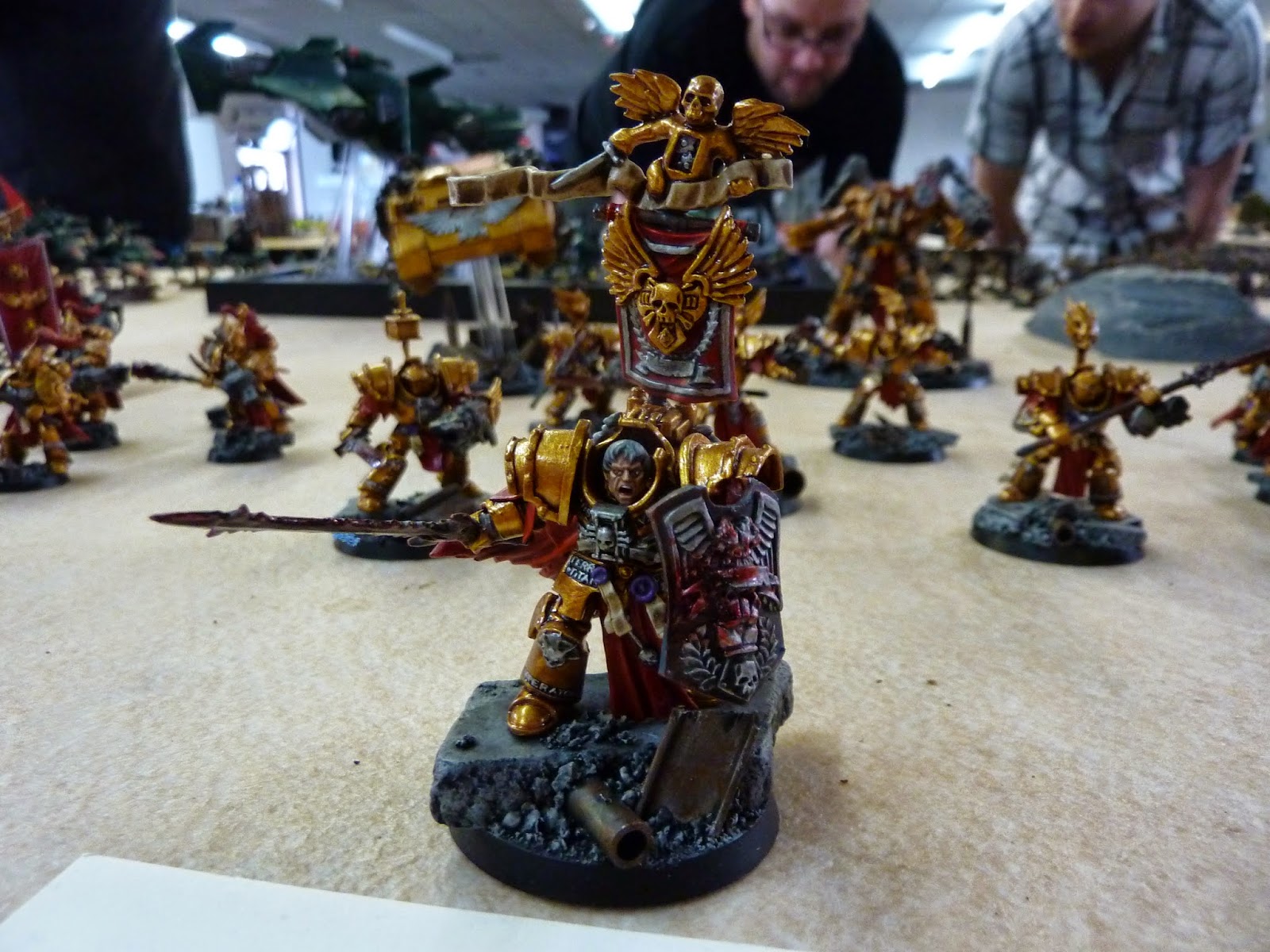 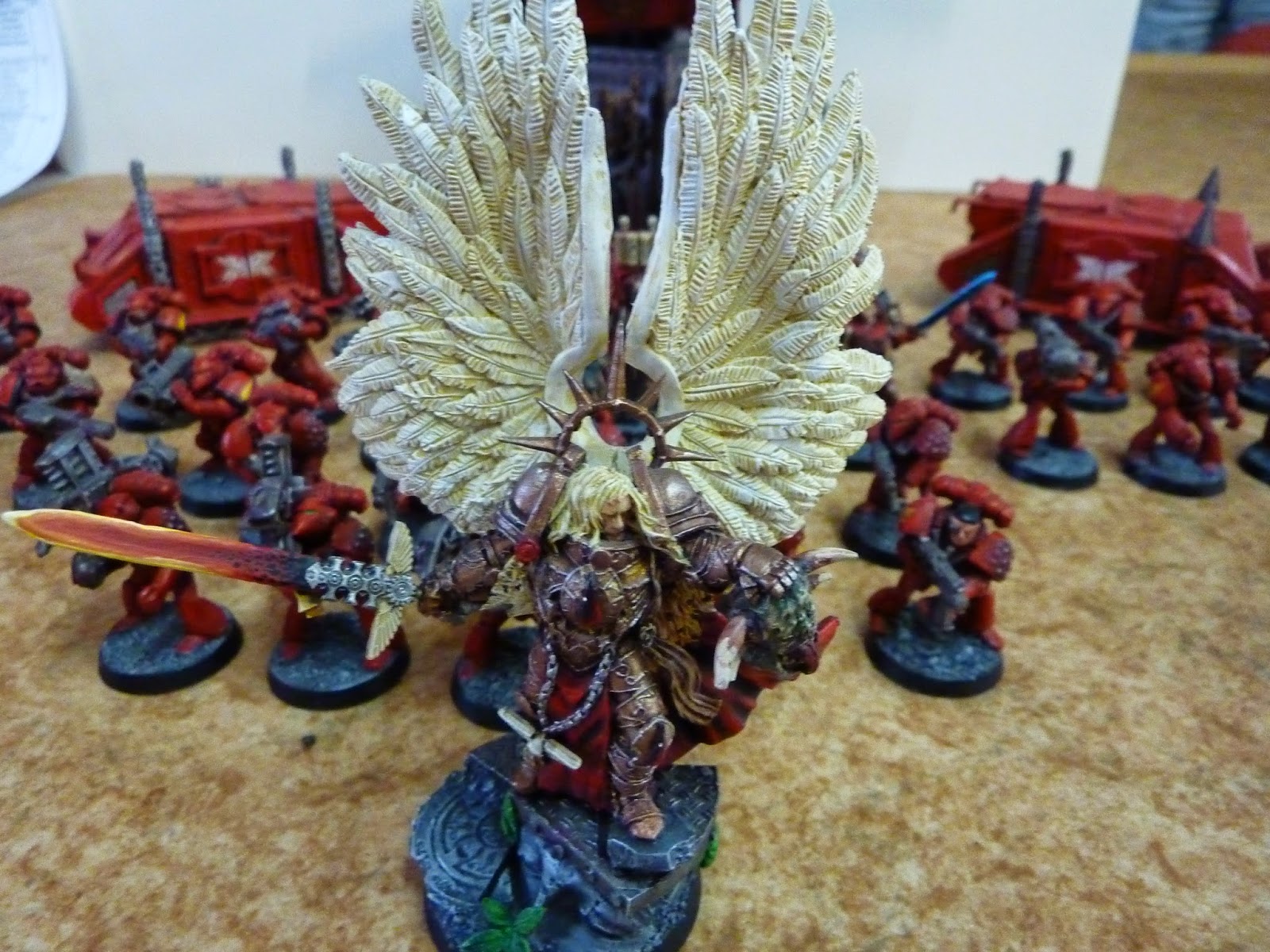 Best Special Character Winner
The winning character came from Jamie Jackson's army. He was fielding Iron Hands (who lack a Special Character) so he dreamed up a Chapter Master on a bike conversion that would act as his SC. This is no ordinary Chapter Master though as, in typical Iron Hands fashion, he's actually more machine than man! For more information on the conversion and more shots of Jamie's army head over to his blog, Index Astartes. The rest of the army is beautifully painted and features some excellent conversion including a full track land raider and modified attack bike. 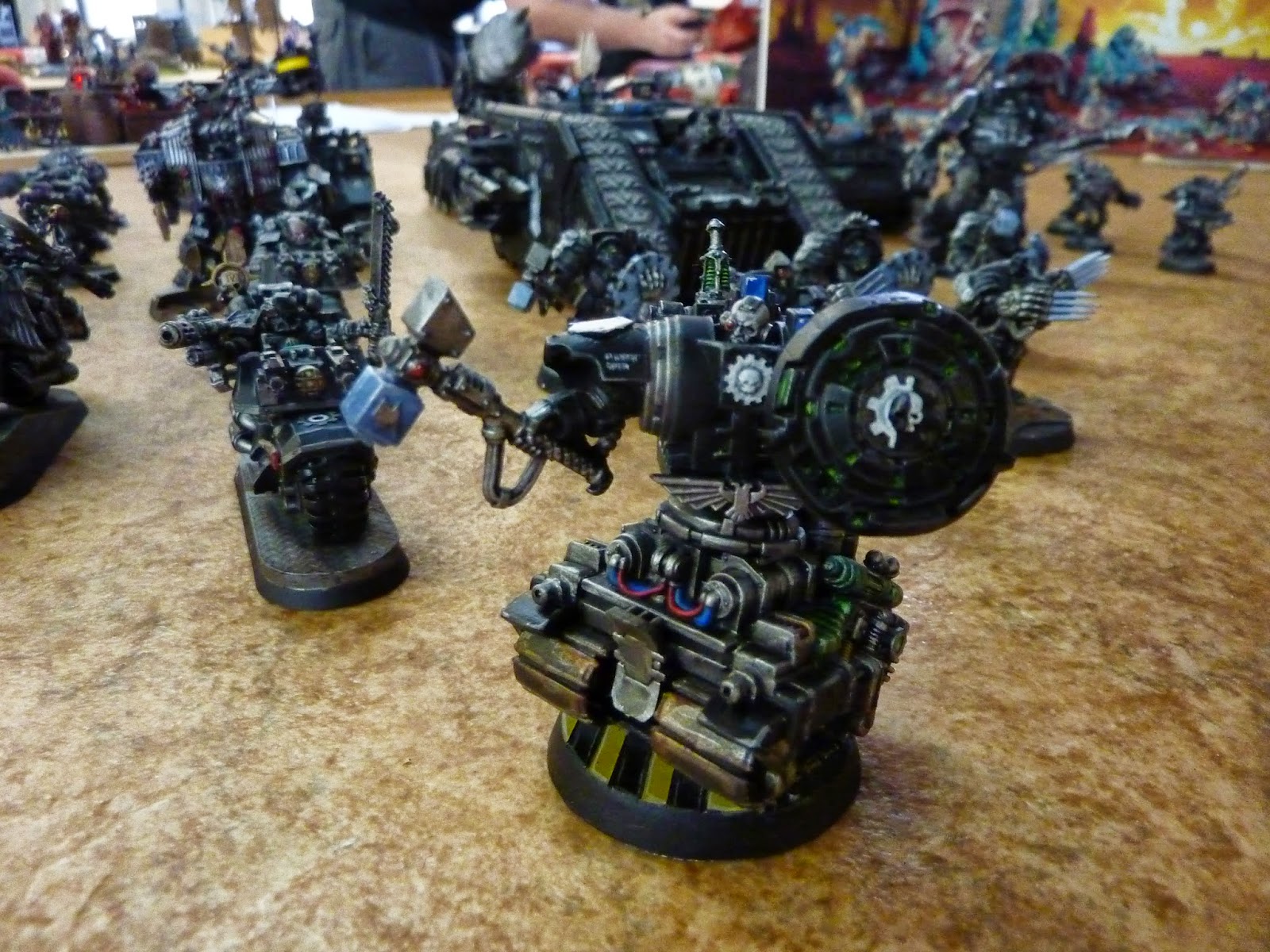 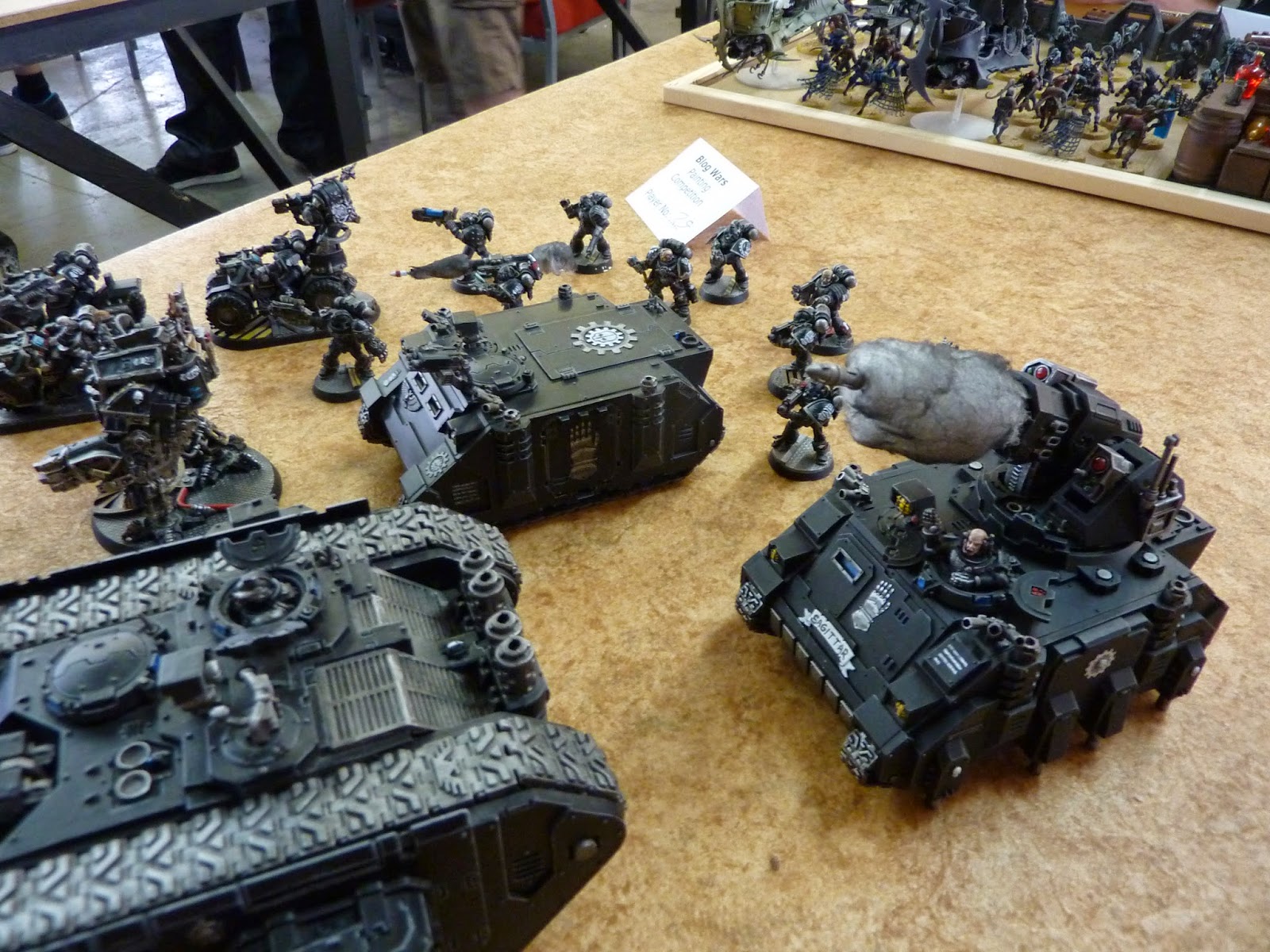 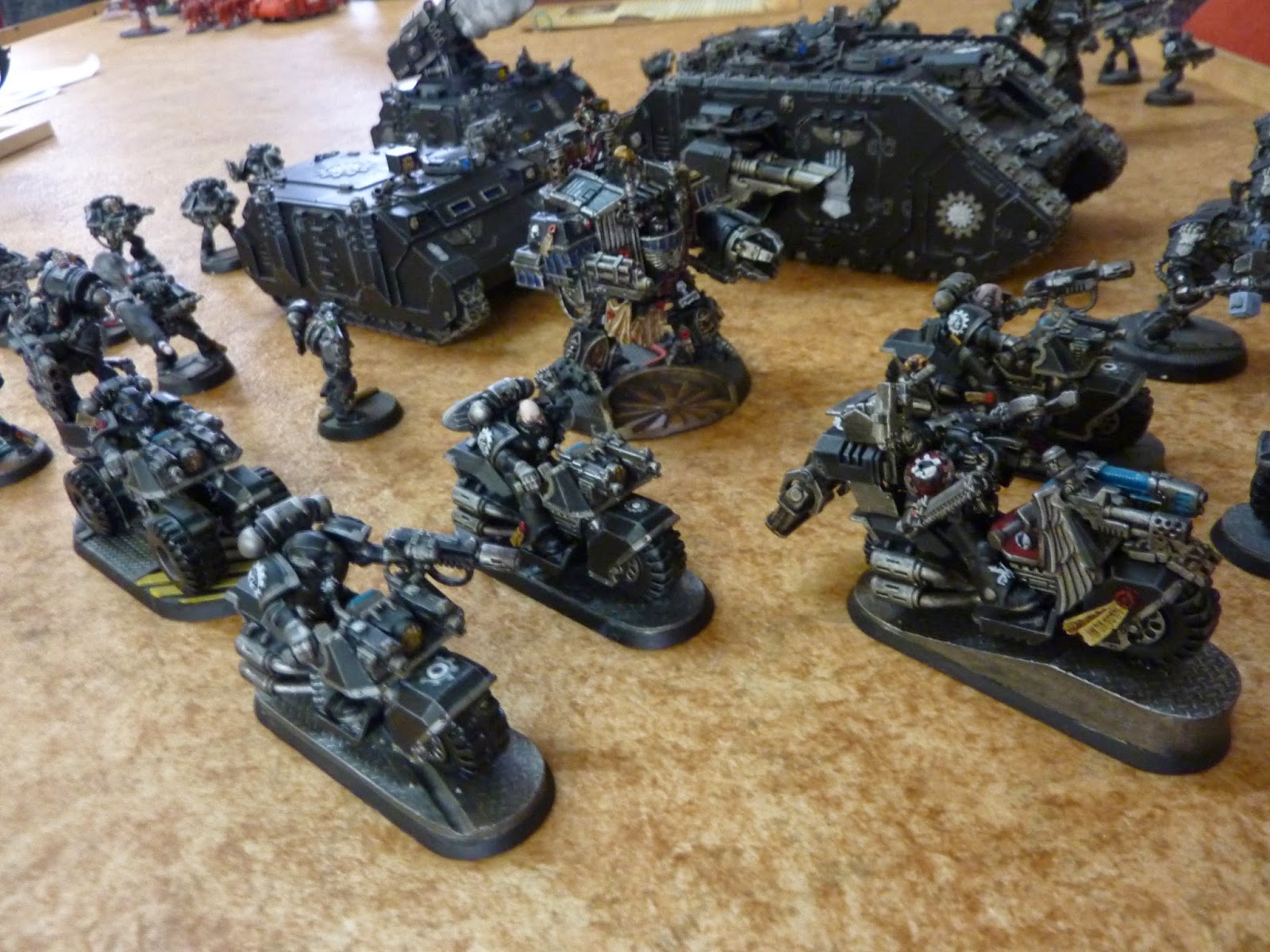 Honorable Mention
Despite forgetting that I'd said there'd be a TO's choice award at BW7 I wanted to mention one army that caught my eye. The first of which is Ian Connolly's pirate themed Dark Eldar army with some beautiful conversions and the best army list I've read in a long time. Instead of Power from Pain they gain Power from Rum as alcohol numbs their pain, makes them want to fight and then eventually makes them fearless (literally). The one and only time I had a Best Theme prize it was Ian who won it and I'm certain he'd win this time if I'd have kept it up. 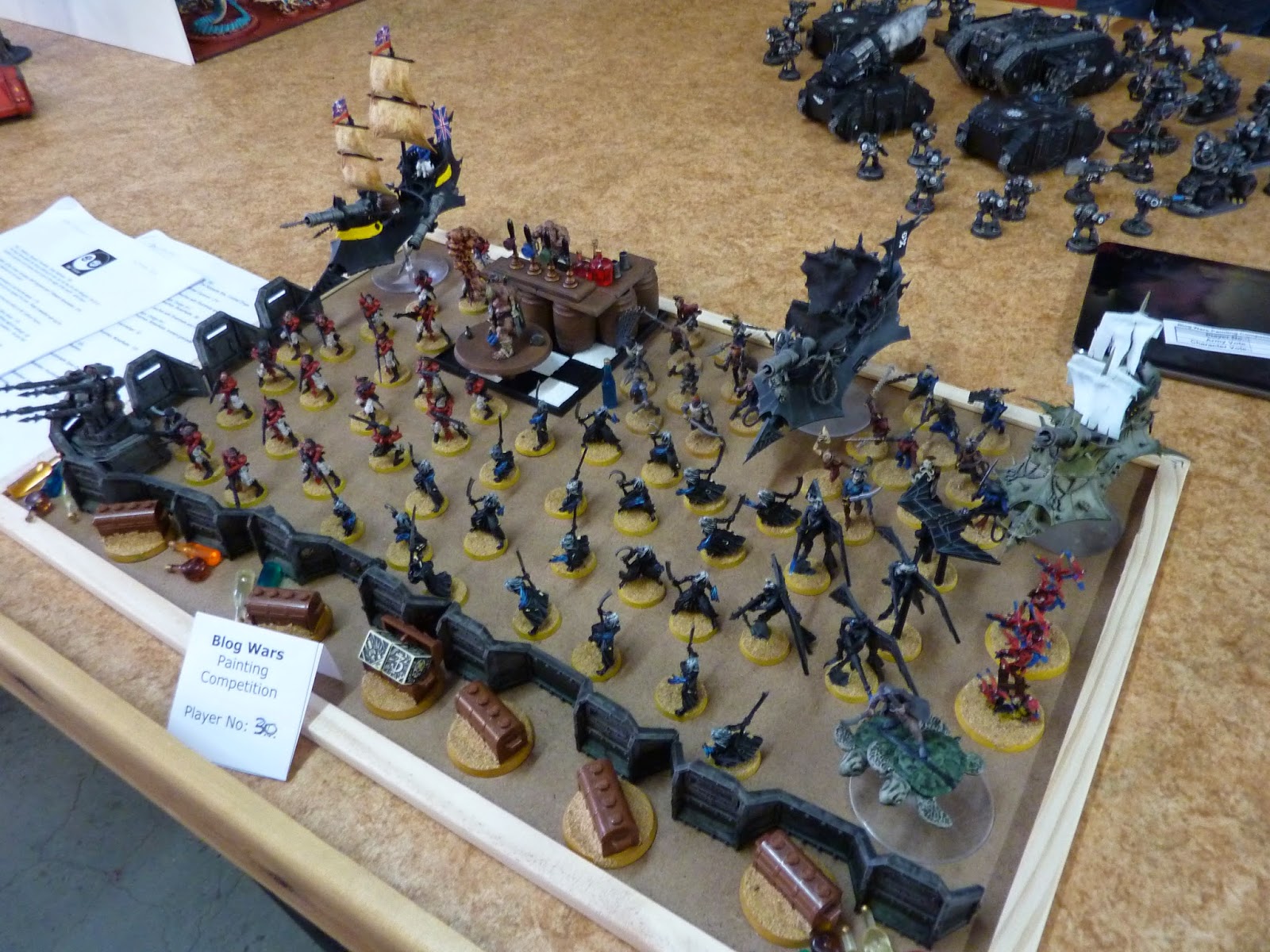 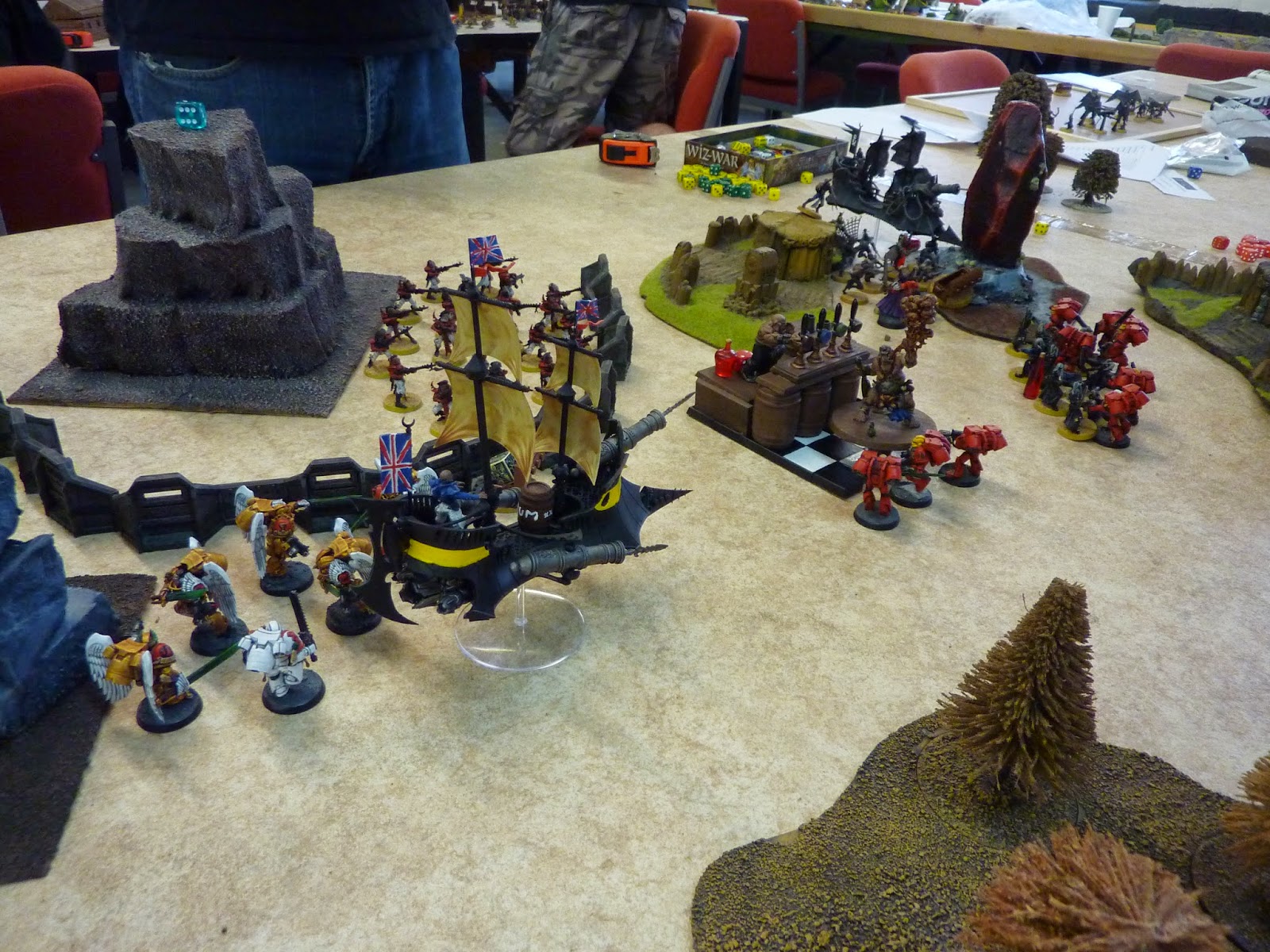 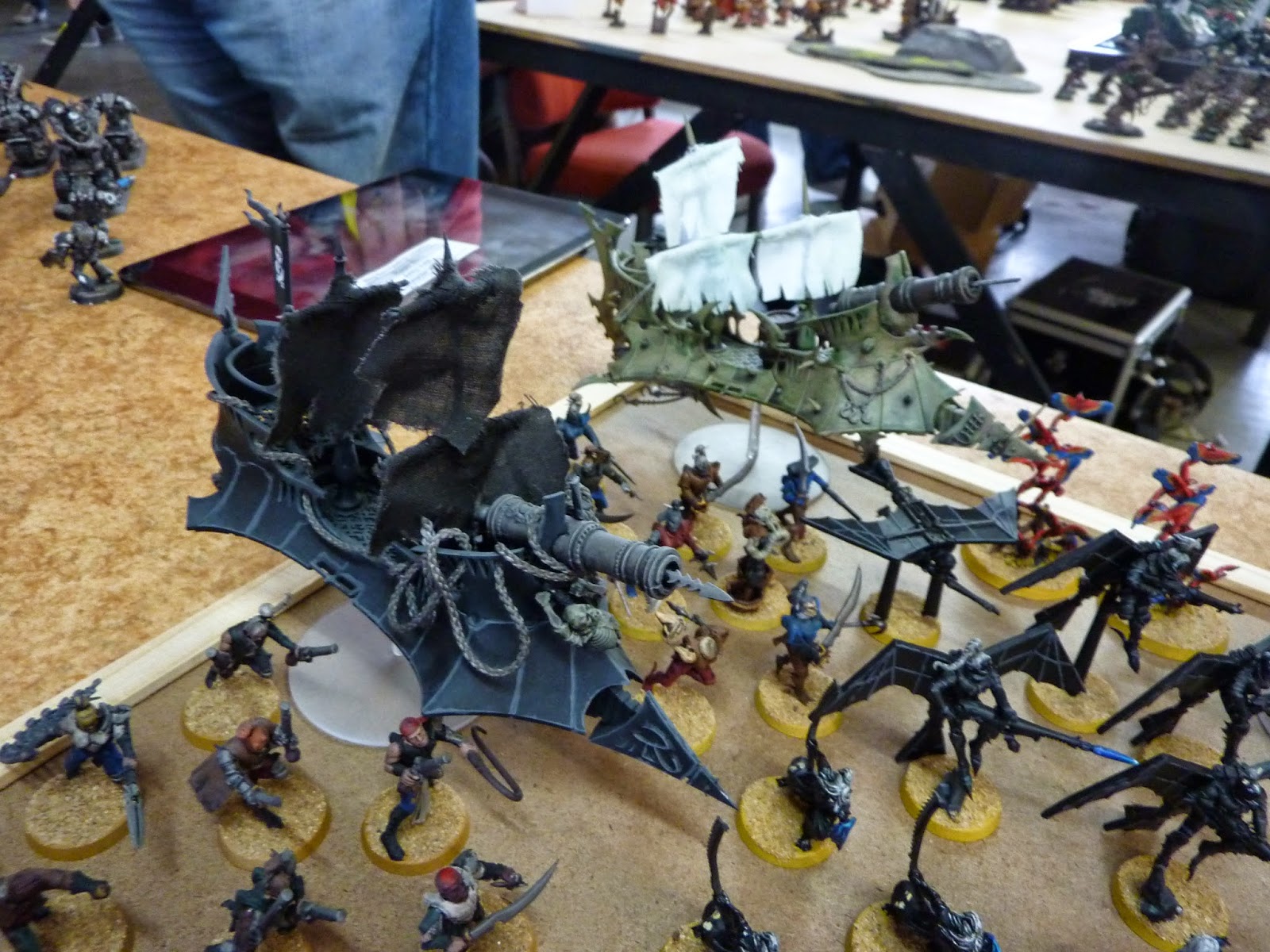 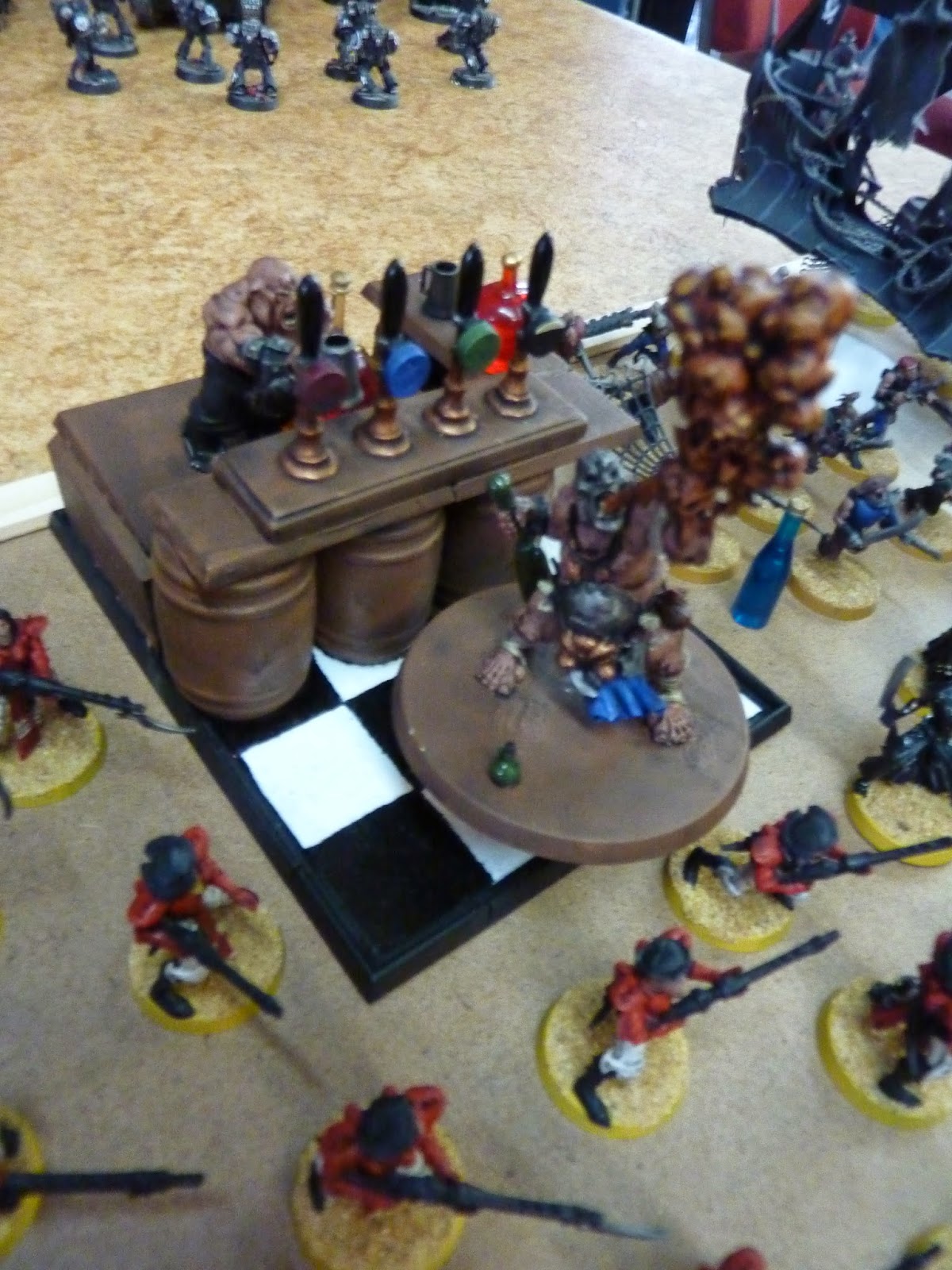 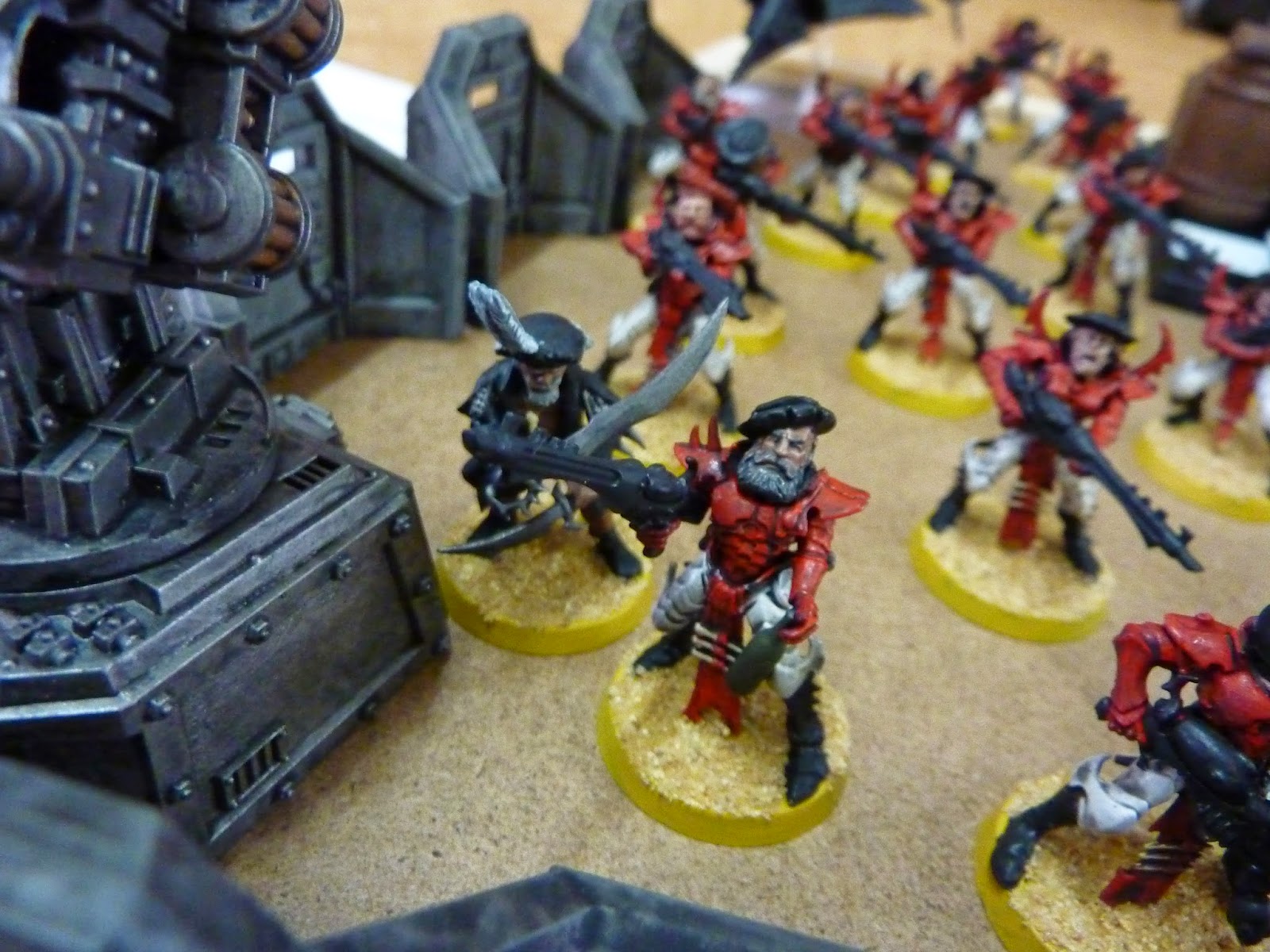 Thanks to everyone for putting the effort in to make some cinematic looking battles. Sorry to anyone I haven't mentioned here. I look forward to seeing what people produce for BW8.