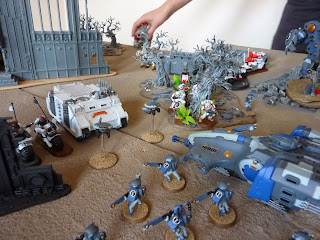 Thanks to the Eldar Wave Serpent being all kinds of useful it's a good time to look again at mech lists for the Tau army and how viable they can be in 6th edition. There's no doubt that there's been a huge shift away from vehicles since the start of 6th edition and the tank walls of 5th edition are just a distant memory. This is largely down to how much easier they are to take down. Hull point stripping means that anything with enough S5+ firepower (or gauss, haywire, etc) can easily down the humble rhino or razorback. However, Eldar and Tau (and to a lesser extent Imperial Guard) can field several AV12 transports which, whilst only having slightly thicker armour, are able to hold up a lot better. This is largely due to the shift towards mid-strength shot spam rather than the S8+ shots of late 5th edition.

There's no denying that in 6th edition objectives are key to winning games with 5 of the 6 missions featuring them. Assuming you aren't planning on simply wiping out your opponent (which is certainly possible with Tau) then you need to think about manoeuvrability. That static gunline of fire warriors is great if your opponent is forced to come to you, for whatever reason, but soon becomes impotent if the roles are reversed. With this in mind I've been looking at mechanising my Tau cadre. Here's the list I've been trying out ahead of Blog Wars 6:

Obviously Darkstrider is to comply with the compulsory SC for Blog Wars but otherwise it's a very similar list to the one I took to Reanimation. The notable difference is the ditching of the Ethereal, aegis line and several fire warriors to give all three remaining teams of fire warriors a devilfish. Now, obviously this list could be more mechanised but it's a step in that direction for now. Right, let's move on to the list in action:

Game One vs. Eldar (Jamie)
What Happened 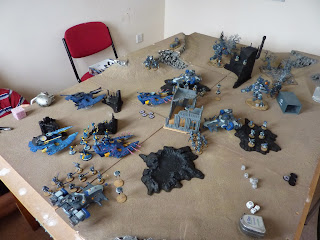 The game was pretty much a white wash. Jamie was fielding a heavily mechanised Eldar force but thanks to going first a couple of the Eldar tanks had already dropped by the end of turn 1. This was mostly due to the pathfinders getting a sickening number of hits. Sadly for Jamie his reserves arrived piecemeal which meant they were picked off as they arrived. With Darkstrider and his unit wading through masses of troops and continued marker support the fire warriors were able to hold onto the objectives pretty easily.
Tau Thoughts
Despite not having much in the way of dedicated anti-tank (only the missile crisis team really), the pathfinders helped the riptides and crisis teams to make the most of their firepower and bring down the Eldar skimmers. It might've been a very different game if I'd gone second as my pathfinders would've been a priority target but nevertheless I was pleased to have dealt with a mechanised opponent.
Eldar Thoughts
Eldar will usually be stiff competition for the Tau as they can put out similar volumes of fire but are far more mobile and with no psychic defense (not that many armies still have it) the Tau are vulnerable to the offensive powers. This was a mech vs. mech affair that really could've gone either way and there's no doubt I was lucky to kill some of the Eldar tanks when I did. 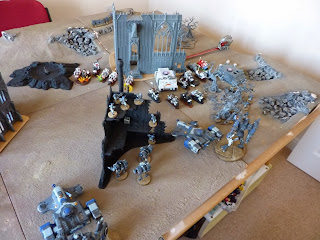 Despite getting the first turn again, Jamie stole the initiative allowing his White Scars to make the most of their speed to get in range with their grav weaponry and kill off a decent number of pathfinders. I was pretty unlucky with my return fire too which meant that one riptide died to graviton fire having failed its Nova roll. All of the fire warriors had gotten out of their transports to meet the bikes head on but this just left them out in the open and vulnerable. My commander and Darkstrider's devilfish arrived from reserve and brought down the command squad with Khan but I'd lost most of my infantry by this stage so the objectives would be a struggle. I slowly swept across the board killing everything in my path but unfortunately it was too little too late and Jamie had enough left to control objectives and win the game.

Tau Thoughts
With hindsight I should've used Nova to gain a 3++ save but then this wouldn't have saved the riptide who failed his Nova. I didn't play the game particularly well as I should've been focussing on troops more. Two of the three tranports made it to the end but sadly their occupants had long since bought it. This game served to highlight that whilst this mech Tau list is more mobile than my previous list it still can't keep pace with truly mobile armies.

Space Marine Thoughts
This was the first time I'd come up against grav weaponry and I can't say I was that blown away by it. Obviously it was effective against the riptide but if you can get that 3++ save off then it isn't going to be all that devastating. Once the big stuff is out of the equation you're mostly better off using the bolters for increased accuracy as you'll struggle to wound pathfinders with the grav-guns. If you came up against a list without any big MCs in it you'd wish you'd brought along plasma or melta. Against marines it's wounding on 3+ but that isn't particularly awesome. Whilst White Scar bikes are harder to kill thanks to effectively having Skilled Rider, they're still just T5 marines and still suck in combat. Obviously they're a strong opponent but perhaps they aren't as exciting as people think. 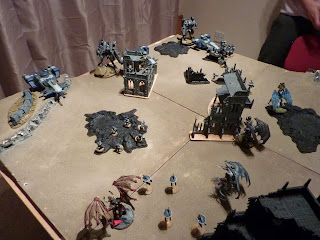 I've beaten Matt's Daemons (normally allied with Chaos) nearly every time I've played them with my gunline Tau list. This has largely come down to two things a) the overwatch from my gunline is punishing and b) daemon princes don't like Longstrike's railgun. This time I wouldn't have either of those though so I wasn't feeling especially confident. I'd also be lacking Darkstrider as we were testing at 1,750 for another tournament. Things were looking up though when I managed to kill off the portalglyph daemon prince with my opening volley. Sadly there were still 4 other flying MCs to deal with. Despite getting them grounded easily enough I couldn't force enough failed saves to bring down any more of the beasts. Thanks to Enfeeble the daemon princes were able to Smash and insta-kill my riptides and my fire warriors were devastated by Fateweaver's Sunburst psychic power. Oh and the warp storm table didn't do my many favours either! We called it towards the end of turn 4 as Matt had very much got the upper hand and I was quickly running out of weaponry to deal with his MCs.

Tau Thoughts
There's one major advantage that Tau have over other armies when facing flying MCs and that's disposable firepower. You only need to hit them to force a grounding test which means markerlights and drones are excellent. This frees up your real firepower to hammer the now grounded beasts. If you can't down them at least the riptides can hit them at full BS with great weaponry for dealing with princes. That being said there's significantly less firepower in this list with 8 less fire warriors and no Ethereal. Darkstrider's toughness modifier probably makes up for the fire warriors but losing so many shots without the Ethereal is painful. I'd say that's probably the key difference with my old list that allowed the DPs to make a real mess of my army. It didn't help that my commander was late to the party (arriving on turn 3) either.

Daemons Thoughts
This is probably the first time I've played a true "flying circus" list. The Bloodthirster is devastating in combat but obviously didn't really get chance to shine against Tau. Fateweaver and the princes get access to tons of psychic powers so some great combinations are actually pretty likely to happen. Their may be a limited number of troops in the list but if the portalglyph can be deployed out of sight then the spawned daemons are likely to get ignored when you've got so many MCs in your face. Obviously this list relies on a lot of luck from the warp storm table and random psychic powers but with the right rolls it can be extremely deadly. Can your army deal with 5 flying MCs? Of my four races, only the Tau would stand a fighting chance I reckon.

Overall Thoughts about the List
There's a big debate about how markerlights affect vehicles and more specifically how Ignores Cover works against Jink saves. Personally I think it makes sense for it to affect vehicles just as easily but until GW officially corrects it the debate will still rage. Even so, having three pathfinders teams is very useful. It means you've got a decent chance of having marker support until the later turns and being able to light up multiple targets or combine two teams onto a crucial target is great.

There's no denying this list has significantly less firepower than before. The devilfish and drones probably make up for the reduced number of fire warriors but the Ethereal is definitely missed. When you think about how many shots you're losing per turn, nevermind over the whole game, then you can see why the ethereal is a great choice for fire warrior based lists.

I also really missed Longstrike. Whilst he's going to be a priority target, the S10 railgun doesn't half make Daemon Princes fearful. It's shame he's quite so expensive though as it'd be hard to squeeze him into this list without dropping something significant.

Moar Mech?!?
As I said above this isn't a truly mechanised cadre. To achieve that you have to start looking to Forge World for the Tetras. Otherwise the pathfinders are too obvious a target in a list of tanks. I suppose you could look to Sky Rays for marker support but they're simply not as effective and suck up valuable points. The crisis teams and riptides aren't technically mech either but they're a pretty crucial part of the list. The kroot could also be traded for more fire warriors but they're always useful for getting into the backfield and claiming objectives.

Without significantly changing the list i.e. dropping the riptides, I can't see me taking a more mechanised list than this. Love them or hate them the riptides are undoubtedly crucial and without them you're hampering yourself. Of course broadsides can fill some of the gap left by riptides but they aren't nearly as effective in most situations.
Posted by From The Fang at 18:48:00