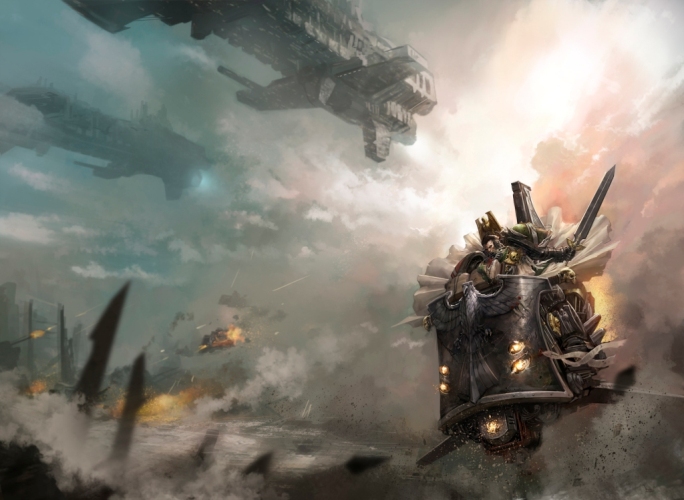 Since the codex came out I've been struggling to get to grips with it enough to create some lists. Whenever I start a new army I have what the Americans would call "kid in a candy store" problem. There's so many units that I want that I end up running out of points pretty quickly. The more I try to write lists the more I love this new book. Now this all might change when I actually put some stuff down on the table but for now I'm pretty excited! I'm currently working at 1,850 pts in the hopes that I can get the army ready for Blog Wars 5 (details soon!) but we all know how that'll go. Anyway, here's what I've managed to come up with so far:

Sammael will join the Black Knights and cruise around looking for targets. Their grenade launchers should help those corvus hammers insta-kill stuff if they hit with both rad and stasis. His plasma cannon will work nicely with the squads plasma talons.

The libby sticks with the command squad and uses Divination powers. The apothecary should hopefully keep the relatively small squad safe when combined with the 4++ save from the power field. This should help against those pesky Heldrakes. The auspex should help the command squad's plasma talons pick off some targets in close and won't hamper the librarian.

The attack squadrons will try to stick as close to the standard as possible to unleash some punishing volleys. In objective games (i.e. most of them) they can combat squad which, with the attack bikes, gives me a whopping 9 scoring units! Hopefully if they can stay within range of the standard (and it's bearer stays alive) it won't matter that they are only Ld 8. The attack bikes will zip around either trying to stay safe for late objective grabbing or picking off any heavy armour that might appear.

The darkshroud needs to stay with Sammael to give his squad 2++ turbo boost saves (stealth, skilled rider). This will hopefully deliver them into combat safely and after that the shroud will probably be blown up.

The Nephilim is probably going to be useless but I'm determined to work it into the list. In the event that it's as useless as we all suspect then it'll probably be replaced by more bikes.

There's a punishing about of firepower here if its directed properly. The fire from the wealth of melta and plasma plus the devastation bolters will be difficult for most armies to absorb. Overall I'm pretty pleased with how this list looks. I've been wanting to do a pure RW list ever since I bought Dark Vengeance so I'll be giving this a test once I've got my bikes built and sprayed. Sadly I need to pop out and buy Sammael and a Darkshroud first though!

The problem I can see with this list is that it relies on a couple of key units staying alive, which they won't for long. That and it needs to be a bit of a blob to work at it's most effective which will never work on the table. Have to wait and see I suppose.

Very similar to the other list but with a static element behind the Aegis line. This will provide a bit more anti-air and with the bikes zipping around hopefully the tac marines will get ignore or else act as bait for counter charges from the bikes. This time there's a possible 10 scoring units. The tac marines are equipped based on the fact that I'm using DV models for now. I might switch things around a bit at some point and try flamer and a flakk missile launcher in each (although I'm not sold on them at all - more later).

With no standard, two of the attack squadrons have vet sergeants to hopefully keep them from running. The other will be joined by the libby so won't need it. The libby is mastery 2 here because then he'll have a better shot at decent powers but if this proves worthless he can swap to auspex/power field for the same points. This list only relies on a single model staying alive, the darkshroud, but without the standard it has significantly less firepower.

Conclusion
Not sure which I prefer from these two. Both have a ludicrous number of scoring units, granted their small and easily dealt with on their own but I'm sure my enemies will end up wasting fire on small units and won't be able to bring them all down. The chocolate list will be a good test of the combination of two different wings, the "green" bit isn't much in this case but provides a bit of stability.

Hopefully I'll get to test these out soon but I've got A LOT of bikes to build before I can! I'll update you on how that's going soon!
Posted by From The Fang at 17:00:00