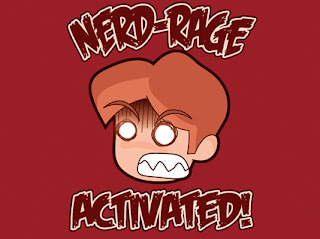 After a somewhat mixed start to the contest I found myself sat in 6th place out of 12 competitors. Not bad but not great. We'd now moved up to 1,500pts and I was up against Simon's Chaos Space Marines again... or so I thought. Cue the nerd rage (I apologise in advance).

The top two people in the tournament had played each other before and whilst one was happy to play again the other wasn't so in the interests of variety the tournament organiser decided to swap things around. Those in 3rd & 4th place had already played the top two so they were no help. This meant Simon in 5th place would play 1st place and I'd be playing 2nd place. I had issues with this for several reasons. Firstly, out of the 4 people only one had a problem so surely majority rule should've taken over. Secondly, the top two were already through to the knockouts so why did it matter who they played? Thirdly, they hadn't played at 1,500 points yet so they'd have totally different armies and it seems a bit much to bring Grey Knights to a tournament and then complain about having to play several Grey Knights on Grey Knights games. Finally, and most importantly, if Simon and I had played (and Matt had won the 3rd/4th position game, which he did) then we'd be playing for 4th place. Not that I'd relish being up against 3 GK lists but all the same it'd be nice to finish 4th at least.

However, all that being said Franco had to try and keep people happy and to be fair to him he did his best. It was pretty inevitable that at such small numbers there'd be duplicate games but I just felt Simon and I had been cheated out of our shot at 4th place. Anyway, onto the reports. 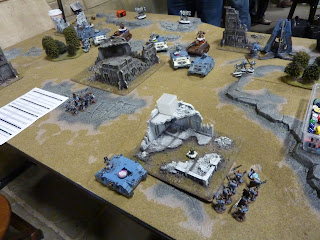 I found myself up against 2nd place man John with his unbelievably huge GK army considering how expensive they are and that we were at 1,500 points. There were a crapload of razorbacks (all with strike squads), 2 chimeras (with death cults/servitors and terminator inquistors) and 2 psyfleman dreads. We were playing Pitched Battle and Capture and Control. With the sheer amount of firepower at John's disposal I was going to need 1st turn if I were to have any hope of surviving the match. Sure enough John got it and I failed to seize!

At the end of his turn one after a barrage of fire I found myself with one long fang and a wolf guard out of both long fang packs, 2 dead rhinos out of the three and two squads pinned (rather unbelievably). My cunning plan however, was to bring in my drop pod dreadnought right on his objective and ensure that he'd have to deal with both in order to avoid a cheeky contest. John had other ideas and warp quaked on all of his strike squads meaning I had a tiny area at the back of his lines that I could drop into without risking mishap. I came down near one of the strikes squads and killed off a couple. The remaining long fangs wrecked a razorback (I was hoping for an explosion of course) and I retreated the remaining rhino back to my objective.

John's second turn of "bringing the rain" cost me one more long fang (the terminator just wouldn't die!), the final rhino and a few grey hunters. The dread lost an arm and couldn't shoot but was still able to move. My other "ace in the hole" was my land speeder which if it came on late might be able to contest and provided my grey hunters could hold on I could still steal a dirty win. Brilliantly he came on straight away on turn 2 and with nowhere to hide him I was forced to blast him 24" and hope. My rune priests killed a razorback each (rather satisfyingly) and the dread charged some strikers and killed them, leaving him open to shooting. The lonely terminator shook a razorback but it would be his last act of the game.

John swiftly dealt with the landspeeder wrecking it straight away with a psyfleman. Then he did his best to bring as much of his army towards my objective as possible. One hunter squad was still a little way away and they were caught by a strike squad charge. They held on for a couple of turns but when one of the inquisitors came to reinforce the grey knights it was game over for the hunters. I now had an immobilised dread and two hunter packs remaining to help me hold onto a draw. I got lucky and blew up a chimera (John immobilised the other moving it through cover next turn) and then I used Murderous Hurricane on the occupants. This killed the servitors and meant that the rest of the squad wouldn't reach me for combat.

The remaining (weakened) grey hunters had to hold off 1.5 strike squads and a terminator inquisitor in order to hold onto the draw. At the end of turn 5 it was all set up for a bloody stalemate but with me getting a turn 6 I knew I didn't have much chance. Sure enough I got wiped out in combat and then in Turn 7 John completed the tabling by killing off the drop pod. Can't say it was as one-sided as I thought it would be but I certainly never felt like I got off the back-foot. 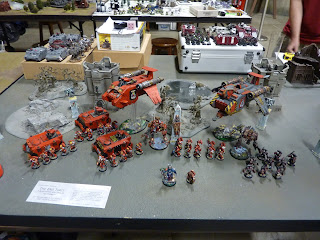 Having been paired against Graham from C&F's Tyranids I found myself swapped AGAIN to play someone of much higher rank than me. This time in the form of Eddie's gorgeously painted Blood Angels with some really well executed conversions. We were playing everyone's favourite Dawn of War but this time coupled with Annihilation. I didn't get first turn but Eddie wisely chose to let me have it anyway. I brought on my entire army in turn one with my drop pod scattering off the table (behind a tactical squad) allowing Eddie to chose where it arrived.

Eddie brought on his entire army too (2 storm ravens, 2 dreads, death co. w/ librarian, 2 razorbacks with squads). The razorbacks' occupants and one of the storm ravens easily destroyed the dread and his drop pod and I was already 2-0 down. The other storm raven could only rip off a storm bolter from one of my rhinos though which was a lucky break. I managed to bring down the nearby storm raven but a torrent of fire from the rest of my army wasn't enough to kill the dreadnought (as he passed all his cover saves) instead he was just immobilised (which suited me fine). The death company had to charge a rhino and blew it up and the dread finished the other rhino wrecking it (yet again I got pinned on Ld10). 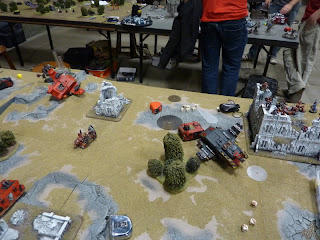 The lone wolf charged the immobilised dread and got himself killed but I'm not sure if Eddie remembered to lose an attack for being immobilised (not that it probably mattered). The tactical squad's plasma cannon thinned out my grey hunters who charged the death company. I managed to kill all but the librarian who managed to fight off both grey hunter packs taking both rune priests and passing all his storm shield saves. At this point it was pretty clear how it was going to go and despite killing the other storm raven and dread I was never going to win it and it was only because two grey hunters huddled behind cover that I avoided being tabled.

Conclusion
There's one more battle to talk about but it was so brilliantly epic and fun that I want to dedicate an entire post to it so I can get in all the gory details. I finally got to play Graham's tyranids in the end and with another 'nids vs. wolves battle on the table next door it was suitably awesome.

Overall it was a fantastic tournament and it was clear that the organisers had put a massive amount of thought and effort in to everything. Fair play to them for trying to keep everyone happy (I know from Blog Wars that it isn't easy). I'll happily attend again next year if they run it. Congratulations to Frank Marsh for leading his Eldar Army to a surprise victory over all three Grey Knights players, couldn't have happened to a nicer bloke. I'll leave you with some prize ceremony pictures featuring Nick Bayton from GW as a tech priest! 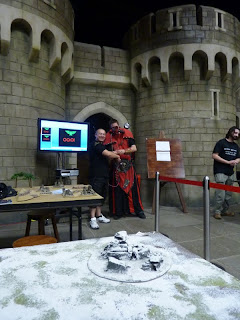 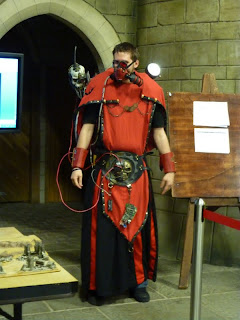 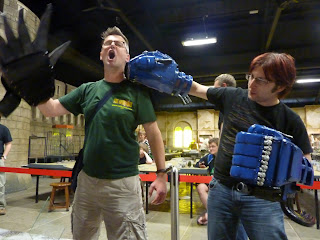