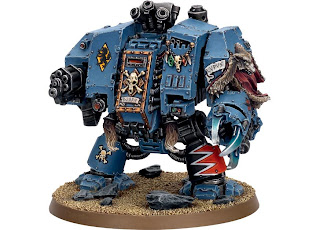 OK so they're far from new but the way GW talked about them you'd think they were! Dunno if anyone else reads "What's New Today" on GW's website but I couldn't help but notice the other day that they're re-released some of the old space marine models. Along with the old school Marneus Calgar (pre-antilochus armour) they've also brought back power armoured Njal and Bjorn the Fell Handed.

I can't say I'm particularly fond of either model myself since Njal is very two dimensional and Bjorn is a massive heavy lump of metal and I'm used to nice light plastic now! I remember having an old metal ultramarines dread and it wasn't exactly fun to assemble and it weighed a ton! Oh and by the way he's a whopping £36.00! Nice to see the model back because it's how I first knew Bjorn to look but seriously, when you get a stack of spare wolf bits to convert a standard dread with, you'd be mad to fork out £36 for the real thing. If you are suitably mad the model is re-released on 22nd of January so get your pre-order in now! I urge you to consider the forge world Space Wolf dread first though! Makes me want to do something about my dread's close combat arm to make it look more like a claw though.

Let's hope they still get round to doing a second wave of Space Wolf models but since they seem content with the old ones I can't see it happening myself. Would be nice to see a proper Ragnar, Ulrik and some plastic fen wolves & thunderwolves though.
Posted by From The Fang at 21:00:00